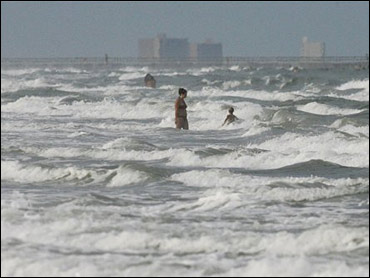 Tropical Storm Erin and its torrential rainfall headed for flood-weary Texas early Thursday, while in the eastern Caribbean, Tropical Storm Dean has been upgraded to a hurricane and is on course for Dominica and St. Lucia.

Erin is not expected to gain hurricane strength before making landfall in Texas on Thursday morning. Gov. Rick Perry has ordered emergency vehicles and personnel, including National Guard troops, to the Harlingen and Corpus Christi areas.

"Because storms have saturated much of our state this summer, many communities in this storm's projected path are at high risk of dangerous flash flooding," Perry said in a statement.

In the Caribbean, local governments in St. Lucia, Martinique, Guadeloupe and its dependencies, Saba and St. Eustaties, issued a hurricane watch late Wednesday for Dean.

In the Gulf, Erin formed late Tuesday as the fifth depression of the Atlantic hurricane season and was upgraded to a tropical storm Wednesday when its maximum sustained speed hit 40 mph. The threshold for tropical storm status is 39 mph.

At 2 a.m. EDT, Erin was centered about 110 miles southeast of Corpus Christi and about 215 miles south-southwest of Galveston, according to the National Hurricane Center in Miami. Its top wind speed remained at 40 mph.

Erin is moving toward the west-northwest at around 12 mph and is expected to continue following that track for at least 24 hours. Its center is expected to be very near the Texas coast on Thursday morning.

Erin is likely too close to land to gain enough wind speed to become a hurricane, with sustained wind of at least 74 mph, said National Weather Service forecaster Tony Abbott in Brownsville. But the center said late Wednesday it could strengthen slightly before landfall.

Isolated tornadoes were possible along the middle Texas Gulf Coast on Thursday, the center said.

In the Caribbean, as of 2 a.m. EDT, Dean was centered about 550 miles east of Barbados, according to the National Hurricane Center. It is moving west near 23 mph, and is expected to continue the same path over the next 24 hours.

Out in the Gulf of Mexico near Texas, Shell Oil Co. evacuated 188 people from offshore facilities in the path of Tropical Storm Erin.

Three to 8 inches of rain is possible along the middle Texas coast, the hurricane center said, with a storm surge of up to 3 feet above normal tide levels north of where the center makes landfall.

A series of storms this summer poured record rainfall across Texas and parts of Oklahoma and Kansas. At least 16 deaths have been blamed on flooding since mid-June.

In the Pacific, Flossie was downgraded from a hurricane to a tropical storm after sideswiping Hawaii's Big Island with only intermittent rain and moderate winds.

It was a close call: Flossie approached the biggest and southernmost of the Hawaiian Islands with winds as high as 140 mph (225 kph) earlier in the week, making it a Category 4 storm. If it had made landfall, the powerful hurricane would have been the first to hit the isles since Iniki slammed Kauai in 1992, killing six people.

Hurricane specialists expect this year's Atlantic hurricane season - June 1 to Nov. 30 -to be busier than average, with as many as 16 tropical storms, nine of them strengthening into hurricanes. Ten tropical storms developed in the Atlantic last year, but only two made landfall in the United States.