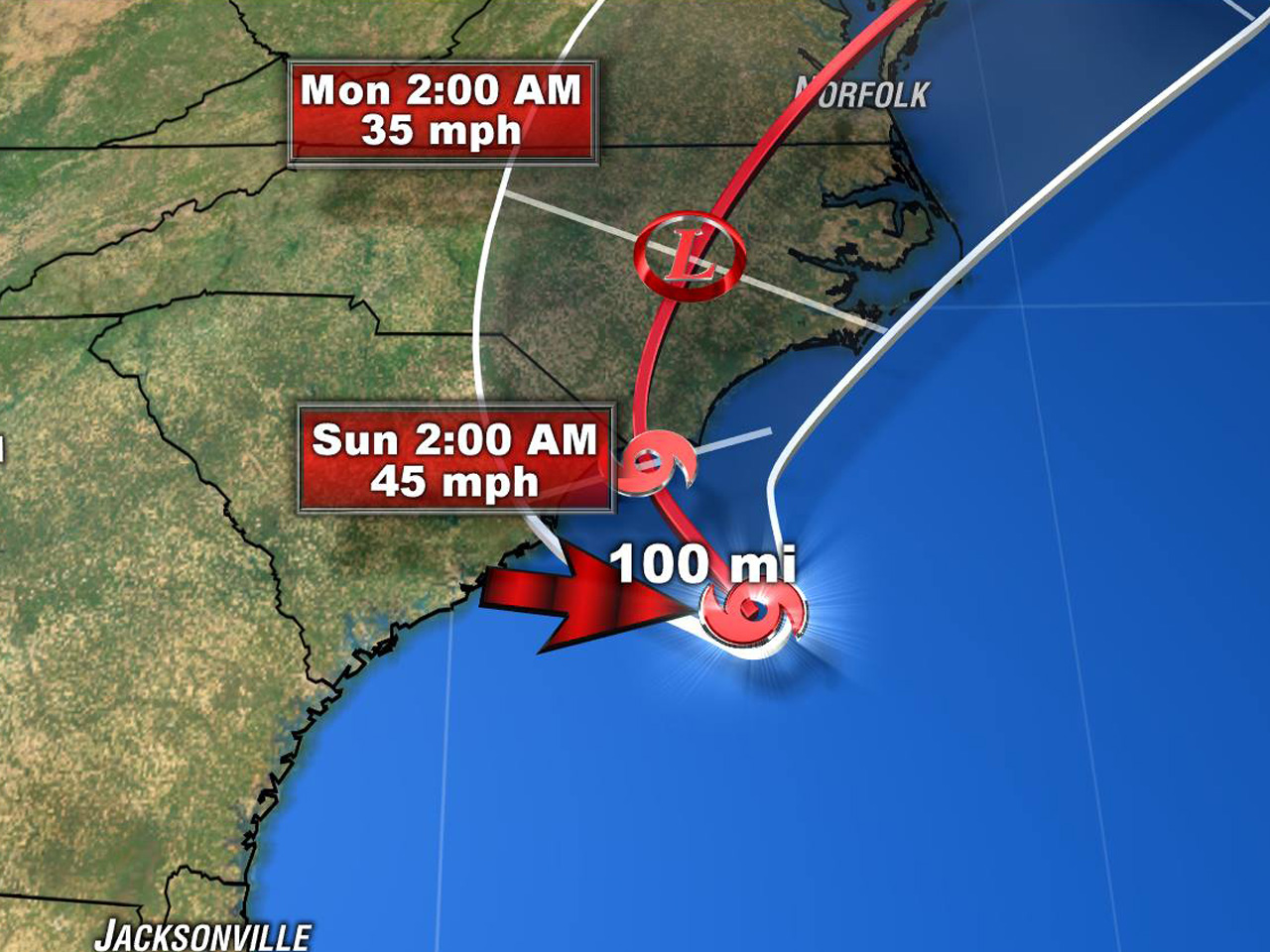 The first named storm of the season made landfall near Myrtle Beach around 6 a.m. on Sunday.

The National Hurricane Center upgraded Ana from a subtropical to a tropical storm overnight, reports CBS affiliate WCSC in Charleston. The system is continuing a slow north-northwesterly track.

Ana was moving to the north-northwest at a plodding pace of about 5 mph.

The storm was kicking up 11- to 12-foot seas - as recorded by offshore buoys - and the dangerous surf was a worrisome aspect of the storm, hurricane specialist Dave Roberts said. He advised people to stay away from the water.

"It's about rough surf. People need to stay off the beach for sure," Roberts told The Associated Press by phone from the hurricane center.

Although the Atlantic season doesn't formally start until June 1, early surprise storms are not all that unusual every few years or so, the center said. There were two May tropical storms in 2012, for instance.

A tropical storm warning remained in effect from the South Santee River in South Carolina to Cape Lookout, North Carolina. Forecasters said the storm, once it hit cooler waters, would weaken further and head inland while breaking up.

Dave Rey, a homeowner in Little River, South Carolina, said he didn't expect the surprise tropical storm to buffet his plans to cook dinner for his mother on Mother's Day. He lives not far from Myrtle Beach but said blustery winds early Sunday weren't a problem.

"There isn't much to do for this one, just a little wind and rain and a couple of downed branches, not a whole lot going on ... maybe 20 mph winds" so far in Little River, he told the AP by phone from a Waffle House where he was hanging out.

Nonetheless, he said he hoped such an early tropical storm didn't signal a busy Atlantic tropical season ahead.

"I'm a little concerned because it's starting so early; it's four or five months early. I hope it doesn't mean we are going to have a very active storm season."

Meanwhile, emergency officials kept a watchful eye on the storm.

The North Myrtle Beach Department of Public Safety announced Saturday that no swimming in the ocean was allowed because of the weather. In New Hanover County, North Carolina, authorities cautioned people who were thinking about a weekend beach outing.

"Beachgoers are encouraged to use extreme caution this weekend," said Warren Lee, Director of New Hanover County Emergency Management. "With the elevated risk of rip currents, the best advice is to stay out of the water when the risk for rip currents is the highest and comply with any advisories given by lifeguards."

Ana marked the earliest subtropical or tropical storm to form in the Atlantic since another storm named Ana emerged in 2003, the hurricane center said earlier on Twitter. The Atlantic season officially runs from June 1 to Nov. 30, a period experts consider the most likely for tropical activity in the ocean basin.

Hurricane specialists said Ana emerged from a subtropical system, meaning it initially had characteristics of both a tropical storm - which draws energy from warm ocean waters - and a traditional storm system driven by temperature changes typical of cooler weather before the season start.

In addition to rough surf and blustery winds, forecasters said, some 1 to 3 inches of rain were expected over a wide area with more in some isolated spots.