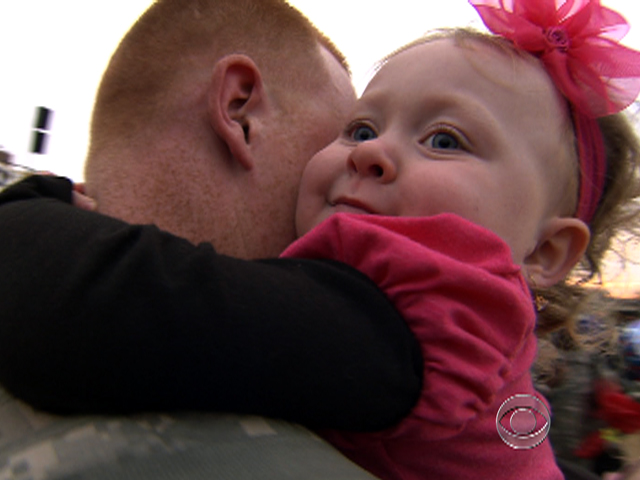 KILLEEN, Texas - Today is the day 20-year-old Brittany Hampton has been waiting for - her husband returns home to her and her two girls 4-month-old Aubrey, and two-year-old Sophia.

Hampton says it's been really hard without her husband around. "I love my girls to death but it's hard to do by myself. You have to do everything on your own." She's proud of her husband and those he serves with. "They are courageous. You couldn't ask for a better man."

The family hung welcome signs and will great their father in their Sunday best clothes. James Hampton has been in Iraq since February. The last time he saw Aubrey, she was only two weeks old.

Not far away, the Thomas boys were a little less cooperative than the Hampton girls in their preparations to see their father.

Erica Thomas's husband Capt. Darren Thomas has doen four tours in Iraq. He was supposed to come home in February, but instead - he's coming home now. She described the situation as " An early christmas present for my entire family. My three-year-old son is excited that his daddy's coming home."

Darren Jr., knows his father. But 18-month-old Joshua may not. His father has been home just 3 months in the past two years. "It's tough at times," Thomas says, "But he chose the Army and I chose him so I deal with it."

"You're so proud, Hampton says. "But I'm the one left back here. He's missing so much with the girls. I'm so proud of him but don't know that it's worth it. It didn't seem like he's there for a good reason."

Does Thomas think this mission has been worth it?

"I'm gonna take the politically correct standpoint on that one, cause my husband is an officer, and say, he did the job he was supposed to do," Thomas said.

After 10 months abroad, the Hampton family was finally reunited. The war is over, and so is the wait.