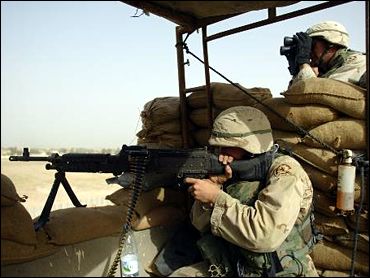 Militiamen barraged a U.S. base Monday in the most intense attacks yet on U.S. troops in the holy Shiite city on Najaf, where the Americans have been holding back their full firepower to avoid enflaming the anger of Iraq's Shiite Muslim majority.

Another American soldier was killed in Baghdad in an attack on a weapons cache he was guarding — the 12th GI killed in May and the 744th since the war began. The attack wounded two soldiers.

The shelling in Najaf began overnight, when some 20 mortars hit in and around the former Spanish base that U.S. troops moved into a week ago. There were no casualties.

Heavy mortar fire resumed at midday Monday, and U.S. troops returned fire. Tanks were moved up, swiveling their cannons — though they did not fire — and Apache helicopters circled overhead. Sniper fire could also be heard. Clashes eased several hours later but small arms fire and occasional mortar blasts could be heard throughout the afternoon.

The U.S. military has deployed at the base and outside Najaf to crack down on radical Shiite cleric Muqtada al-Sadr. But they have been hampered in responding to frequent al-Sadr fire out of fear of angering Shiites for whom Najaf is a holy city.