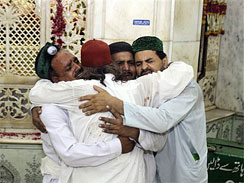 The attackers struck as thousands of people were visiting the Data Darbar shrine, where a famous Sufi saint is buried. Islamic extremists consider Sufis to be heretics and have often targeted them in attacks.

The first suicide bomber detonated his explosives in a large underground room where visitors sleep and wash themselves before praying, said Khusro Pervez, the top government official in Lahore.

Minutes later, a second bomber detonated his explosives in a large courtyard upstairs as people tried to flee the first attack, he said.

At least 25 of those wounded in the attacks are in critical condition, said Pervez.

Demonstrators gathered outside the shrine in the hours after the attack, protesting the security lapse that allowed the attacks to occur. Police fired into the air and threw rocks to disperse the protesters.

There was no immediate claim of responsibility for the bombings - the latest in a wave of deadly attacks to hit the country, where security forces are battling Pakistani Taliban in its lawless regions near the border with Afghanistan.

Lahore is Pakistan's second-largest city and capital of its most prosperous province, Punjab. It is a key political, military, and cultural center and has been the scene of some of the most spectacular attacks in the country over the past year.

On May 28, gunmen and a suicide squad lobbed grenades and sprayed bullets in attacks on two mosques in the eastern city packed with worshippers from the minority Ahmadi sect. At least 93 people were killed and dozens wounded.

The government has been criticized for lacking the will to crack down on militants in Punjab, many of whom are part of now-banned groups started with government support in the 1980s and '90s to fight the Soviets in Afghanistan and pressure archenemy India.

Many of these groups have formed links with the Pakistani Taliban, which has recruited militants to carry out attacks in parts of Pakistan far from its sanctuary in the northwest near Afghanistan.

One of the most high-profile attacks in Lahore came in March 2009, when militants armed with rocket launchers, hand grenades and assault rifles attacked Sri Lanka's cricket team and security detail, killing six police and a driver and wounding seven players and a coach.

That assault led to the suspension of international cricket matches in Pakistan.

In October 2009, teams of gunmen attacked three security facilities in Lahore, leaving 28 dead. In December 2009, two bombs killed 48 at a market in the city.