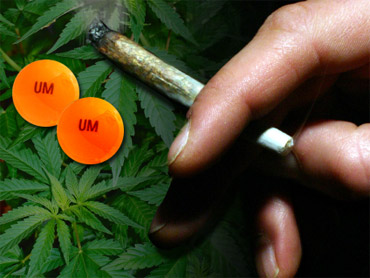 The first U.S. clinical trials in more than two decades on the medical benefits of marijuana confirm pot is effective in reducing muscle spasms associated with multiple sclerosis and pain caused by certain neurological injuries or illnesses, according to a report issued Wednesday.

Igor Grant, a psychiatrist who directs the Center for Medicinal Cannabis Research at the University of California, San Diego, said five studies funded by the state involved volunteers who were randomly given real marijuana or placebos to determine if the herb provided relief not seen from traditional medicines.

"There is good evidence now that cannabinoids may be either an adjunct or a first-line treatment," Grant said at a news conference where he presented the findings.

The California Legislature established the research center in 2000 to examine whether the therapeutic claims of medical marijuana advocates could withstand scientific scrutiny. In 1996, state voters became the first in the nation to pass a law approving pot use for medical purposes.

Thirteen other states have followed suit, but California is the only one so far to sponsor medical marijuana research. After 10 years and nearly $9 million, the Center for Medicinal Cannabis Research is preparing to wrap up its work next year.

Along with the studies on muscle spasms and pain associated with spinal cord injuries and AIDS, the center also has funded research on how marijuana affects sleep and driving, limb pain due to diabetes, and whether inhaling vaporized cannabis is as effective as smoking it.

A laboratory study supported by the center examined if pot could be helpful in treating migraine headaches and facial pain. In that study, rats given a cannabis-like drug exhibited reduced activity of nerve cells that transmit pain.

State Sen. Mark Leno, a San Francisco Democrat who chairs a budget subcommittee on health and human services and supports medical marijuana, said he doubted there would be more financial support for the center, given California's ongoing budget crisis.

The federal government classifies marijuana as an illicit drug with no medical use but produces the only pot legally available for scientific research under a contract with the University of Mississippi.

Grant said obtaining some of the Mississippi crop and meeting the complex security regulations required by the Drug Enforcement Agency and other federal agencies was time-consuming and cumbersome.

Grant, however, had no problem with the quality of the government's supply. Its consistency was helpful in determining that patients who smoked less-potent marijuana enjoyed the same amount of pain relief but less mental confusion than those who inhaled a more powerful strain, he said.

Such quality control is notably absent from the marijuana that patients with a doctor's recommendation can legally obtain in California through hundreds of cooperatives and storefront dispensaries, Grant said.

He said more research was needed on how pot works and its side effects.

"Because we don't know the composition of the strains that are on the street, we don't know what patients really are getting," he said. "As a doctor I feel some discomfort when someone says take X or Y pill or herb because we think that might be helpful."

Since its founding, the center has approved 15 research studies, but five had to be discontinued because there were not enough volunteers willing or able to meet the criteria for participating.

One proposed study on the effectiveness of marijuana in reducing chemotherapy-related nausea was canceled because researchers could not recruit enough cancer patients who weren't already treating their symptoms effectively with anti-nausea medications.

In the 24-page report submitted Wednesday to the Legislature, Grant said research protocols had been rigorous, with six studies published or accepted for publication in peer-reviewed science journals.

In four studies, participants suffering from multiple sclerosis, AIDS or diabetes, along with healthy volunteers injected with a chili pepper substance to induce pain, were randomly assigned to receive cigarettes filled with marijuana. Half had the active ingredient delta-9-tetrahydrocannabinol, or THC, removed.

Not every patient who smoked the real marijuana reported improvement. But the percentage who did was comparable to those who said they experienced relief from antidepressants and other medications commonly prescribed for neuropathic pain, the study said.