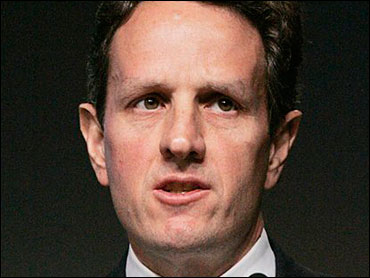 This story was written by David Cho.

Geithner has been working night and day on the eighth floor of the transition team office in downtown Washington with Lawrence H. Summers and other senior economic advisers to hash out a new approach that would expand the program's aid to municipalities, small businesses, homeowners and other consumers. With lawmakers stewing over how Bush administration officials spent the first $350 billion, Geithner has little chance of winning congressional approval for the second half without retooling the program, the sources added.

That challenge is underscored by a report from a congressional oversight panel scheduled to be released today that hammers the outgoing Treasury Department for its handling of the financial rescue, including "what appear to be significant gaps in Treasury's monitoring of the use of taxpayer money." The report, moreover, faults the Treasury for failing to properly measure the success of the program or establish an overall strategy and skewers the department for not using any of the funds on foreclosure relief as Congress had directed.

Much of the work by Obama's team has focused on establishing principles that would clearly define the program's course and the conditions of government aid to financial firms.

With Geithner leading the discussions along with Summers, who will head the National Economic Council in the White House, the group is devising plans that would use rescue funds to help homeowners avoid foreclosure and unclog the credit markets that finance loans to consumers, small businesses and municipalities. The team is also planning to have the government take more stakes in financial firms, but companies receiving federal aid would have to submit to greater restrictions on executive compensation than were imposed by the Bush administration.

Geithner is also considering creating a new bureau within the Treasury to manage the Troubled Asset Relief Program, or TARP, in an attempt to improve the program's operations and oversight.

The group has come to believe the program needs a fresh start after determining the Bush administration succeeded in providing a measure of stability for the financial system but failed to jump-start bank lending or stem foreclosures, three sources said, speaking on condition of anonymity because no announcement has been made.

Although the timing has not been settled, one source said details of this new approach may be laid out before Geithner's confirmation hearing, which is likely to be held late next week.

Some lawmakers are not waiting for the transition team to release its plans. Rep. Barney Frank (D-Mass.), chairman of the House Financial Services Committee, was set to announce legislation today that would force the Treasury to meet conditions if it requested the second $350 billion of the rescue funds. Frank's terms include many of the proposals Geithner is considering as well as several others such as restricting executive bonuses and requiring firms that receive federal aid to explain how they are spending the money. Frank has scheduled a Jan. 13 hearing on the future of the rescue program.

Yesterday, Senate Democrats took their own action to help homeowners whose mortgages are larger than the value of their house, announcing a deal with Citigroup that would allow bankruptcy judges to set new repayment terms for mortgage holders.

Even if Geithner provided additional help for homeowners, he must overcome discontent among rank-and-file lawmakers about the program. Geithner faces a tremendous risk in asking for the money because if the request is turned down, it could wreak havoc in financial markets.

But he cannot wait long to ask for more funds. In December, the Bush administration made $4 billion of its $13.4 billion loan to General Motors contingent on whether Congress approves the second half of the TARP funds. GM needs the money to meet a massive debt obligation due in mid-February.

Obama's top officials have begun discussions with key lawmakers on the TARP changes, but no decision has been made on when they will ask Congress for the balance of the rescue funds. It is possible that the request could occur before Obama's inauguration. In which case, Paulson, not Geithner, would ask for the money. Paulson in an interview this week said he would fully cooperate with Obama's team.

In building a case for the additional $350 billion, however, Geithner must also allay concerns about his past responses to the financial crisis. Geithner, as president of the Federal Reserve Bank of New York, was a leading architect of the bailouts of Bear Stearns, American International Group and Citigroup.

Some lawmakers plan to press him during his confirmation hearing to justify his role at those critical moments of the crisis and on what he plans to do to improve the financial system bailout. Others added that Geithner will have to explain how he would track how recipients of TARP money are spending taxpayer dollars.

The confirmation hearing in the Senate "will be one of the most important that the Finance Committee holds this year," said Sen. Max Baucus (D-Mont.), chairman of the panel. "In the meetings leading up to this hearing, I've been encouraged by the early plans for TARP that Mr. Geithner and other folks on the Obama economic team have outlined. There's no time to waste in righting the ship."

A date for Geithner's confirmation hearing has not been set. But two congressional sources said they expect it will take place Jan. 15.

Several lawmakers on Capitol Hill said they are still angry over the TARP program because it used $350 billion and was largely unsuccessful in unfreezing lending markets. Some banks that took government money continued to pay huge bonuses to executives and dividends to shareholders. Democrats expressed disappointment that the Bush administration did not use rescue money to help homeowners facing foreclosure.

But advocates of the program, including Paulson, said that the financial system would be much worse without the bailout.

"It's been an essential tool and authority to prevent the collapse of the financial system. And I've been very clear that the second part will need to be taken down and that it's vital to our financial security," Paulson said. He added that Geithner "enjoys the confidence of Congress and the markets, and he understands these issues as well as anyone and he understands the TARP in great detail, so he's very well positioned to take this effort forward."