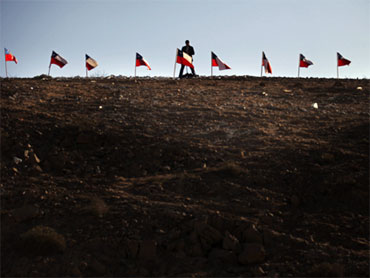 Nearly a half-mile below ground where 33 miners have been trapped for almost three weeks, there's no build-up of toxic or explosive gases and the air has been breathable, if hot and stuffy in their reinforced shelter. There is plenty of open tunnel for them to move around, and even water to drink, dug with a bulldozer from an underground deposit.

Mining experts say the geology and structural characteristics of the San Jose gold and copper mine in northern Chile helped the workers stay alive for 17 days before rescuers finally opened a narrow bore-hole to them Sunday. And despite the mine's history of rock falls in earthquake-prone Chile, the geology also bodes well for their survival in the weeks ahead.

The Aug. 5 collapse of the mine's main access shaft happened about 1,300 feet below the surface, well above where the miners were working, leaving vast stretches of passageways with air to breathe.

The gallery where the miners took refuge more than 2,200 feet below ground is at least 1.2 miles long, with easily enough air to last 17 days or more, said Gustavo Lagos, a professor at the Catholic University of Chile's Center for Mining.

"The caves, the tunnels, that is what saved them," agreed Wolfgang Griem, director of the geology department at the University of Atacama.

The Atacama Desert that surrounds Copiapo is considered the driest place on Earth. Some parts have not seen a single drop of rain since recordkeeping began.

Yet inside the mine, the igneous rock walls are seamed with clay that contains lots of water, which Lagos said he could see beading up and dripping down the walls behind the miners in video images from their emergency chamber.

The moist environment enabled the miners to carve water from the mine floor with a bulldozer to supplement stored industrial water. The internal runoff also means there is an essentially unlimited drinking supply, though Lagos said it could be acidic and cause minor health problems.

"It would probably contain some metals which would make it taste not so good," he said. "If it contained copper it could cause vomiting, diarrhea, stomach pains. ... But it would not kill them."

The dampness combined with warm temperatures caused by the mine's depth have created an environment so stuffy that video images showed some miners stripped to the waist to beat the heat. But they're not at risk for exposure as they would be in shallower coal mines, which can be quite chilly.

With temperatures above 90 degrees Fahrenheit, "we're not too worried about hypothermia," said Larry Grayson, a professor of mining engineering at Penn State University.

The trapped workers also don't have to worry about toxic gases such as carbon monoxide, or explosive gases such as methane, both common hazards in coal operations.

"Where there's coal there's methane gas, and you're going to get accumulations. Explosive gases are fairly rare in hard rock mines," said Grayson.

Copper sulfite can generate smelly sulfur dioxide during mining operations, but they've stopped that. And with copper levels in the mine's vein at less than 1 percent and gold even scarcer, the minerals "will not generate sulfur dioxide in great quantities," Lagos said.

Equally improbable is the possibility of a "rock burst," an extremely dangerous phenomenon that occurs when settling layers of earth bear down on the walls of a mine and result in a sudden, catastrophic release of stored energy. Exploding pillars can turn chunks of rock or coal into deadly missiles, and the shock wave alone can kill.

In 2007 at Crandall Canyon in Utah, a mountain "bump" - the coal mine equivalent of a rock burst - killed six workers and registered as a 3.9-magnitude earthquake, according to seismologists. Days later, a second bump killed three rescuers.

But this mine's structure is likely to be stable after the initial collapse released the stress, Grayson said. "It's probably in a state of equilibrium, at least for a while. As long as there's no new mine activity, that equilibrium would not be disturbed."

Geology also will determine how quickly the miners can be pulled up to the surface. Chile's state-owned Codelco mining company is setting up an enormous perforation drill capable of carving a hole 26 inches wide through solid rock at a rate of 15 to 30 yards a day.

The terrain at the San Jose mine is mostly diorite, an igneous rock formed from cooled magma that is considered to be only medium-hard, Lagos said.

The rescue operation's leader, Andres Sougarret, estimated it would take three to four months to get the men out.

But Davitt McAteer, a former assistant secretary of the U.S. Mine Safety and Health Administration, called that "perhaps the most conservative model."

"We ought to be able to get them out in a period of weeks, not months," he said.

Three 6-inch-wide shafts will serve as the miners' "umbilical cords" - one for supplies, another for communications and a third to guarantee their air supply.

A steady flow of emergency supplies was sent down to the miners on Tuesday in a rocket-shaped metal tube called a "paloma," Spanish for dove. The paloma is 5 1/4 feet long and takes a full hour to descend through the bore-hole.

The supplies included 33 small low-intensity and low-energy LED lights, so that each miner can have a light source that won't bother his eyes in the otherwise murky depths of the mine. Also sent down Tuesday was "more nutritive food" in the form of a vitamin-enriched gel, along with eye patches, aspirin and medicine for one miner who has diabetes and another who suffers from the respiratory disease silicosis, Health Minister Jaime Manalich said Tuesday.

Grayson predicted it could take just 25 to 30 days to reach the miners, while Lagos said it would likely be somewhere between 60 if all goes well and 120 if the effort bogs down.

The miners were lucky to be working far below where the tunnel collapsed. But the mountain itself helped provide the essentials for life.

"It was surprising for everyone in the country to find the 33 of them alive. I was very surprised," Lagos said, but "all the ingredients were there."

To reach the miners nearly 2,300 feet down, rescuers plan to use a larger drill to slowly bore down as much as 100 feet per day. The tunnel will be 26 inches wide, but once rescue equipment is lowered, miners will only have about 19 inches of space in which to squeeze, reports CBS News correspondent Seth Doane.

In one more week, the men will have been trapped underground longer than any other miners in history. Last year, three miners survived 25 days trapped in a flooded mine in southern China. Few other rescues have taken more than two weeks.

Chile is the world's top copper producer and a leading gold producer, and has some of the world's most advanced mining operations.