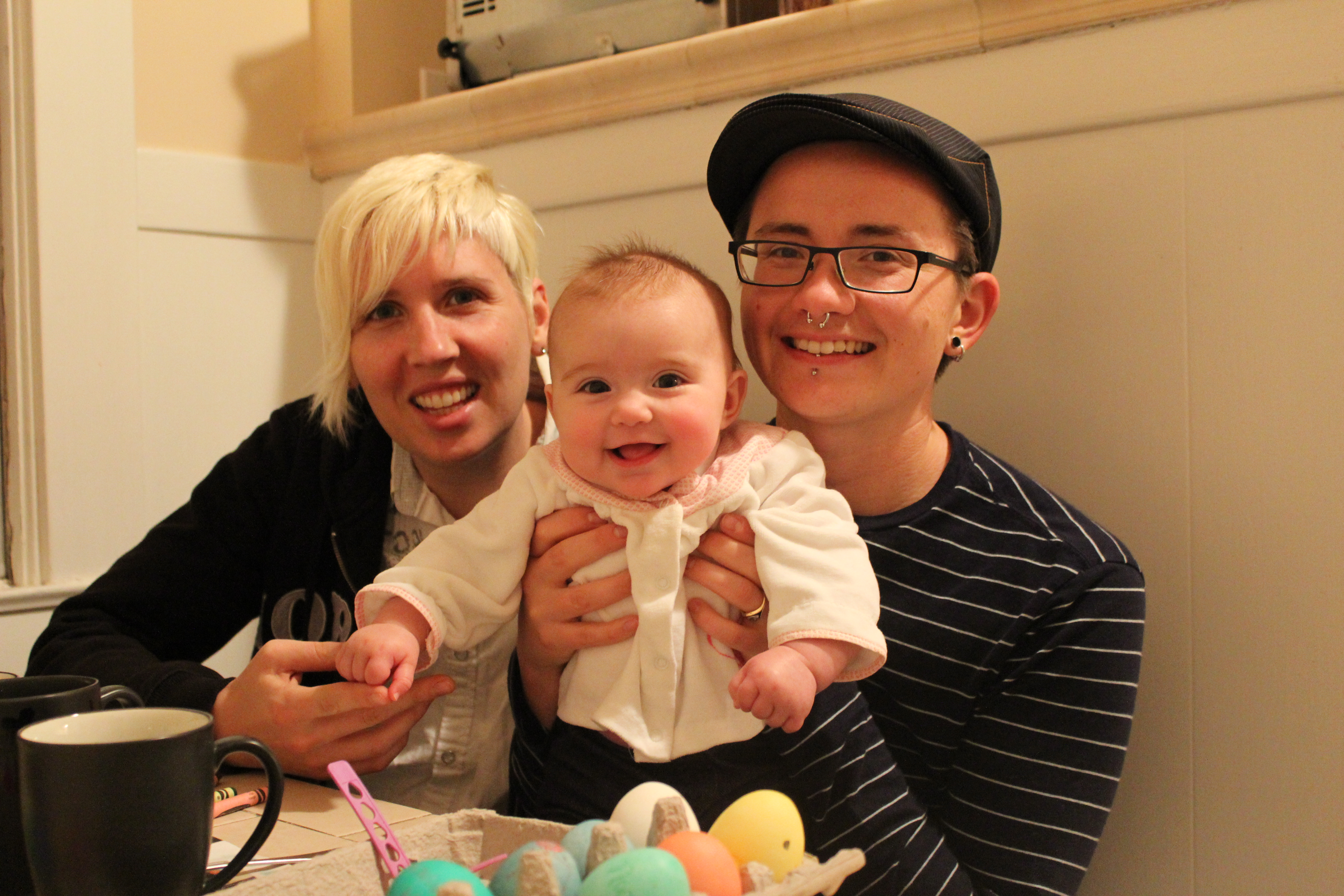 Darcy A. always knew he wanted to have a child. Biologically born female, Darcy came out as a lesbian at the age of 12 and then as a transgender male at 18.

"I always knew that I would have a partner who did not have sperm and figured we would both carry children," he told CBS News.

In November 2014, after being inseminated with sperm from a donor, Darcy, who asked that his last name not be used, gave birth to baby Hayden.

The pregnancy was hard, rattled with seemingly never-ending morning sickness and lots of pain.

"They didn't use the right pronouns when addressing me," he said. "They didn't know how to do pelvic exams on someone who had never had sex vaginally with a man -- meaning nothing fits in there."

Darcy's experience is all too common for transgender men who choose to have children -- and it reflects widespread gaps in medical care for the transgender community as a whole.

Research shows transgender people often postpone medical care due to discrimination or concern about how they'll be treated, and many say they've needed to teach their health care providers about transgender care. Some have even been refused treatment because of their transgender or gender non-conforming status.

A 2015 report from the New York Academy of Medicine on transgender access to quality health care describes how harrowing the experience can be. "We've gotten calls from people who have gotten thrown out of gynecologists' offices because they'll say we don't see men... then they have to explain that they have female anatomy and the doctors are so uninformed," a trans woman and LGBT care provider said.

Although not well tracked -- and barely discussed in the media -- researchers say the experience of transgender men having babies is more common than most people may think. As such, experts say health care providers need to be better prepared to offer medical care to this population.

"Transgender individuals are really one of the most under-served, under-studied groups that are vulnerable to poor health and really need focused attention to meet their needs in evidence-based and culturally sensitive ways," Dr. Juno Obedin-Maliver, a fellow in obstetrics and gynecology at the University of California San Francisco and San Francisco Veterans Affairs and founder of the Lesbian, Gay, Bisexual, and Transgender Medical Education Research Group Stanford University School of Medicine, told CBS News.

Obedin-Maliver couldn't say exactly how common transgender pregnancies are, as they are not included in major obstetrical studies and most OB/GYN's don't ask about gender identity. But she said she sees these patients in her own practice and gets many consult requests from doctors and providers around the country asking questions about how to provide proper care for this population.

In response to the lack of information and increasing interest among providers, Obedin-Maliver, along with Dr. Harvey Makadon, director of the National LGBT Health Education Center at the Fenway Institute, in Boston, wrote an editorial published in the journal Obstetric Medicine last October calling attention to the need for greater support for pregnant transgender men.

In it, they argue that health care systems need to have training programs implemented to instruct everyone from receptionists to physicians on gender affirming policies and behaviors.

An important aspect of this training is assuring that everyone uses the correct pronouns when addressing patients.

"It boils down to respect," Morgan Weinert, who identifies as gender queer (someone who does not subscribe to conventional gender distinctions) and uses the pronouns "he" or "they," explained. "Using someone's correct pronoun shows them that you respect them as a person and honor their identity. Pronouns are personal, like names. By ignoring a trans person's preferred pronouns, you're ignoring their core identity. You're telling them you don't 'see' them in their preferred identity, and that you don't respect the choice they've made." Weinert, who was biologically born female, became pregnant through a sperm donor and gave birth last year to a baby named Early with his partner Aaron, who identifies as a trans man.

Another issue the report addresses is family planning counseling. The authors note that this topic is extremely important for physicians to discuss with transgender men, especially if they are considering hormone therapy with testosterone, as it may affect fertility and impact fetal development.

Obedin-Maliver said physicians should take a complete medical history, including any past surgeries, medical conditions and medications, including hormones, as well as asking about sexual orientation to get a full picture of who the patient's partner or partners are -- and thus who will be caring for the baby.

Lactation consultants should also be trained in communicating with transgender men who have not had chest reconstructive surgery and support them in nursing, or what's referred to as chest feeding.

Rae Goodman-Lucker, who was biologically born female and identifies as gender queer and has both traditionally male and female physical traits -- including a beard and breasts -- emphasized the importance of having an informed lactation consultant during and after pregnancy.

"As a very basic starting point, lactation consultants should get used to using gender-neutral language, using a trans person's correct pronoun, and incorporating terms like 'chest feeding' into their repertoire," he said. "They should also be used to assuming that not everyone is straight. They could inquire about support from a 'partner' rather than a 'husband.'" Goodman-Lucker, who identifies with either he or she pronouns, gave birth to baby Ezra in February 2014.

Finally, Obedin-Maliver points out that considering each patient's individual psychological state, both during pregnancy and after birth, should be a priority.

"Understanding that they're going through a world that mostly identifies pregnancy with womanhood and femininity, that at every step of the way transgender men will have to navigate some of the features of being pregnant in a totally different way," she said. "For example, it's not a 'Mommy's yoga class.' How would a transgender man fit into that? Or maternity wear. What would it look like to have paternity wear that includes pregnancy and chest feeding?"

"Initially people were excited that they finally had someone to use their training on, but then at the same time it didn't seem like they were that educated on it," he said.

Weinert's doctors and their staff also received training in transgender health care, but once he became pregnant, how they addressed him completely changed.

"For some reason, people just stop calling you by your name. So, I was constantly 'Mommy' even before I had the baby," Weinert said. "That's the way I was addressed in providers' offices."

Another issue Darcy noted is that since his partner Heather has more traditionally feminine features, including breasts (Darcy previously had chest surgery) many doctors assumed Heather was the one who had given birth.

"This assumption other times was made because she induced lactation and was breast feeding the baby so questions were directed at her rather than me when they were questions for the person who had been pregnant," Darcy said.

Both Darcy and Weinert said they felt frustrated that they, as patients, often needed to repeatedly instruct health care staff on how to address them and what being transgender means.

"It's lazy and unprofessional," Weinert said. "If a patient came in with a rare genetic disorder, they wouldn't expect the patient to educate them on it. They have to do the work themselves."

Darcy, Weinert and Goodman-Lucker-- who are all subjects of a forthcoming documentary "A Womb of Their Own" that explores pregnancy from a masculine-identified perspective -- say that outside of medical care, society still has a long way to go in accepting transgender families.

Darcy recalled a time late into his pregnancy when he was feeling a lot of pain and an older man yelled at him to give up his seat on the bus. "He was clearly much more able-bodied than I was at that point, but he thought I was just a fat man," he said. "I didn't talk back because I didn't feel like risking a verbal or physical fight so I gave him the seat. So that was hard, when people didn't see it."

Goodman-Lucker, who has a mix of both traditionally male and female physical traits, said many people could often not wrap their heads around the way he looks.

"I look pretty gender mixed in general so people didn't even notice I was pregnant," he said. "They saw my beard, they saw my breasts, and didn't even look as far as my belly."

Weinert also said he gets a lot of confused reactions from people about the dynamics of his family.

"Aaron is black and our baby is very white so I think people have a really hard time wrapping their heads around the way our family looks," he said. "We constantly get asked awkward questions like why is your baby so white, or they ask Aaron, 'So, are you the dad?'

"Looking at the structural institutions that have been set up, anything that falls outside of the norm for that, it's hard for people to adjust."

Weinert said he and his family are considering moving from their current home in the San Francisco Bay area and have to give extra consideration to where they would go next. "There are places we're interested in moving for work or for what kind of house we can afford," he said, "but we have to think, 'Is our family going to be accepted in that place? Are we going to be able to feel safe and supported and like we have a community there?'"

When asked what they would want society to know about transgender families, Darcy, Weinert, and Goodman-Lucker all said they wanted to emphasize that they are not much different than other families.

"When it all comes down to it, trans people love their babies just as much as non trans people," Weinert said. "We're doing this to build families and to expand the people that we love. I have the same concerns as any non trans parent does. Right now I'm trying to find a daycare to enroll my baby in and I'm thinking about potty training. All that stuff is the same. Just because the way that we got to that family looks different, doesn't mean that we're radically different than any other family."

They also expressed the need for society to move away from viewing pregnancy as a strictly female experience.

"When you say 'pregnant women,' you're excluding a whole population of people," Darcy said. "There's no reason to talk about pregnancy as a thing that women experience. It's a thing that people experience."

A Womb of Their Own Trailer from Cyn Lubow on Vimeo.