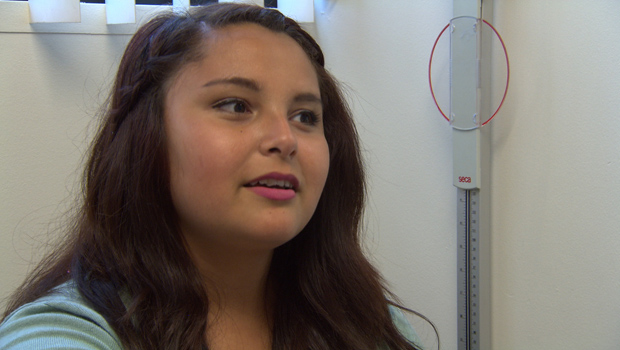 Our Cover Story this morning deals with children grappling with a very grown-up issue: gender identity -- boys or girls believing they're the opposite sex, saying they were born this way. Here's Rita Braver:

She could be any 12-year-old girl, hanging out with her mom and sister, but Zoey was biologically born a boy.

"So how did you handle it when people related to you as a boy?" asked Braver.

When asked what she felt when she realized that her child whom she knew as a boy felt she was a girl, Zoey's mother, Ofelia, said her first reaction was fear: "Not because of who she's presenting to be, but of those around us. What are other people going to say? How are they going to treat her? You know, those are the scary things: What kind of life is she going to have?"

But Ofelia (at their request, we won't be using last names of the families in this story) felt she had no choice. A single mom, she accepted Zoey's decision two years ago to live as an openly-transgender girl.

Zoey's family and her childhood friends in her town near Los Angeles have been supportive. But a survey of nearly 300 transgender youth found that 89 percent reported being harassed in school.

Zoey, too, has endured cruel treatment from her schoolmates:

"Even the kids that do seem like they're good kids, they even make fun of me," said Zoey. "They'll be, like, 'Yeah, we're your friends, tell us more about your stuff and how you're going through life.' And then they'll just turn on you and they'll be talking about what you told them."

Olson is a specialist in the care of transgendered youth, at Children's Hospital, Los Angeles. She says that her patients have a condition known as "Gender Dysphoria."

Dr. Olson defined it as "persistent unhappiness, discomfort and distress about the incongruence between the gender that you are assigned, based on your anatomy at birth, versus the way you internally experience gender."

Estimates on the number of Transgender Americans range as high as 0.5 percent of the adult population -- about three-quarters of a million people. But more and more young people are emerging as transgender.

"I see between one and five new trans kids a week," said Dr. Olson. "So the growth is tremendous. We've had something like a 330 percent increase over the year of 2013. It's just phenomenal."

"What do you think is happening -- are there more transgender children?" asked Braver.

"It's not so much that there are more transgendered kids; it's that trans people are coming out earlier," replied Dr. Olson.

"We also know that among trans people, there are high rates of depression, anxiety, social isolation, [and] suicide attempts. All of these things we see dramatically increased in trans youth. But young people that I've seen, who socially transition in childhood and have support of their familes, they have a very different experience."

Now there is new medical treatment for young people like Zoey. Doctors have recently started administering drugs that block puberty, and keep them from developing unwanted adult characteristics, like facial hair for transgender girls, or breasts in transgender boys.

The effects of those drugs can be reversed. But the effects of hormones -- which transgender youths can take later, to look more male or female -- are often not reversible.

Dr. Olson says, by then, her patients -- like Venice -- are not going back:

At 13, Venice has started taking the hormone testosterone, as well as puberty blockers. He says he has always felt like a boy, though he was born, biologically, a girl.

Braver asked, "In terms of making these changes so that you can go through life as a boy, what's the upside of that for you?"

"The upside is that I'll actually get to have part of the body I do want."

But he says being trans has not been easy:

"It's been a difficult process," said Venice, "because, well, no one really would want to be trans. No one would actually really enjoy it."

And then there is the prospect of sex change surgery, further down the road.

"Is that something that is a little bit scary to you?" Braver asked.

"Yeah, I'm really afraid for bottom surgery, like, how like much pain it will cause," Venice said.

There are practical problems as well. California, where Venice lives, was the first state to pass a law specifically allowing transgender schoolchildren to use bathrooms, locker room and even play on sports teams of the gender that they choose.

But opponents -- like Brad Dacus of the Pacific Justice Institute, a conservative legal group -- say the law puts an unfair burden on other children:

"You're saying under this law that a 13-year-old or 14-year-old girl in a locker room has to change and dress and be naked in front of, say, a 16-year-old boy simply because a 16-year-old boy who's a biological boy, but inside has a mental condition called gender identity dysphoria and thinks that he's a girl," said Dacus. "This is ludicrous, and really unreasonable."

Dacus argues that while transgender kids should be treated with compassion, they should use separate facilities -- say, in faculty or nurses' offices.

And Venice's response? "You can use a separate bathroom, too," he laughed.

But Venice has had other issues to worry about. His parents are separated, and while his mother and brother have always been supportive, his father was not.

Finally, Venice's mom, Trish, sent his father a letter: "It said pretty much, you're on board with this or you can't be in our lives, because a child that's not supported doesn't flourish. And dad looked at that and decided, 'Well, I can either have a son or I can have nothing.'"

Today, Venice's father, Mike, has joined Venice's mother in a support group for parents of transgendered kids. "I was in a lot of fear and anxiety, especially when my kid came out," Mike said.

He acknowledges that he hired a series of therapists in an effort to convince Venice to live as a girl -- all to no avail.

"So I was totally in the wrong area," he said. "Spending lots of money trying to fix a kid that, you know, wasn't really broken.

And parents are beginning to heed the wishes of their children at ever-younger ages. The 6-year-old happily jumping with her younger brother is Mati -- originally named Mattias.

Braver said to Mati, "Your mom told me that when you were born, everybody thought you were a boy except you."

"What did you think?"

Mati said, "I just figured it out."

Mati's parents, Cristy and Enrique, say it started when she was younger than two -- going clothes shopping, for example:

"Cristy and I would go to the boys' section, and Mati would start directly going to the girls' section, wanting to pick clothes from there," said Enrique.

Mati's parents say she was miserable when treated as a boy, and by the time she entered kindergarten in San Diego last year, they felt they had to enroll her as a girl.

"You know that some people are going to see this story on television and say, 'Oh my gosh, they should have waited. They should have insisted on waiting longer," said Braver. "Why didn't you wait longer?"

"She was in pain," said Cristy. "I don't see that there was another option. She was uncomfortable, she was unhappy. You can't see your child suffer like that.

"Nothing's been done that can't be undone. So people that would say, 'Maybe it's too early, we should have waited' -- what did we have to lose at this point? She's happier."

Like all the parents we spoke to for this story, Cristy and Enrique told us they decided to go public because they want to help other families facing the same issues:

And, said Cristy, "I also want for Mati to know that it's nothing that can't be talked about. I also want her to know that she shouldn't be ashamed or afraid to be who she is."

While doctors say some children who identify themselves as the opposite of their physical gender do change their minds as they get older, there is little data on how often that occurs.

"Have you ever thought maybe sometimes, 'Gee, it might be fun to go back and dress like a boy and be more like a boy'?" asked Braver.

"Is there anything you'd like to say for maybe other children who people say, 'Oh, you're a boy,' but they know that they're a girl?"

The unlikely story of Romania's first-ever marriage between two women