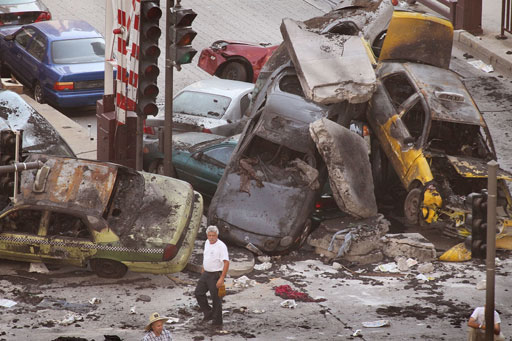 NEW YORK (CBS) Smashed cars, rapid gunfire and heavy smoke filled Chicago's streets - but it was only for a movie.

"Transformers 3" has been filming in the Windy City, and some normally busy streets have been shut down to accommodate the production.

In one scene, some skydivers jumped off the Trump Tower, soaring over the Chicago River and landing on Wacker Drive. (Watch the video below)

Over the weekend, sections of Michigan Avenue, in the heart of the city's downtown, were closed to accommodate the filmmakers, who also staged skydiver stunts, fireballs, gunfire, and explosions.

Onlookers crowded around the area Friday afternoon with their cameras and cell phones held high above their heads, hoping to capture glimpses of the action or the film's stars, who include Shia LaBeouf.

Reports state that the film is expected to pump $20 million into Chicago's economy. Scenes will also be shot in Detroit, Washington and Los Angeles.