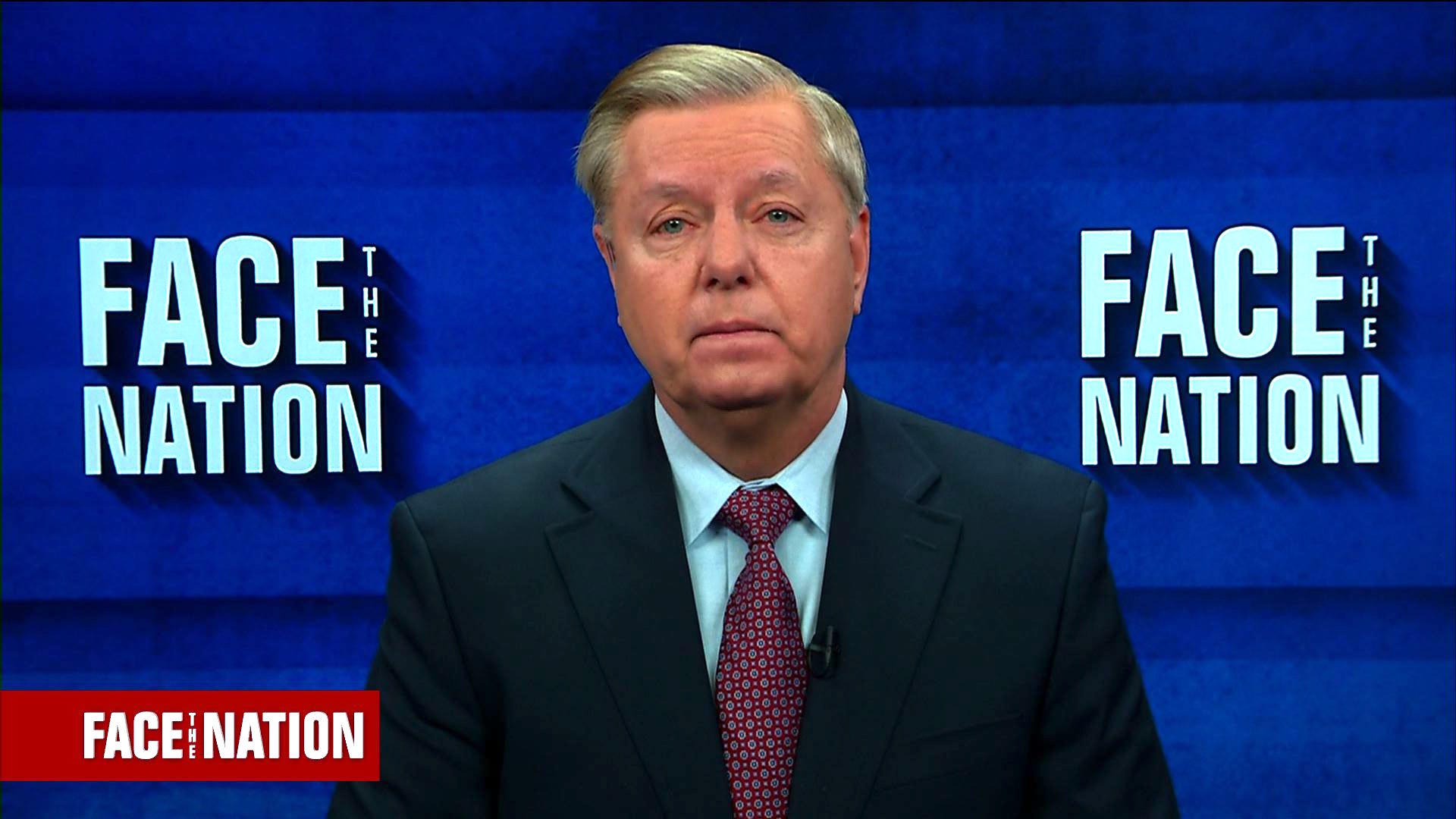 Protests roiling Iran reportedly turned deadly overnight, with two demonstrators killed amidst the largest rallies in the country since 2009. President Trump warned Saturday that "the world is watching" how the Iranian regime responds, calling on the government to "respect their people's rights, including right to express themselves." Mr. Trump tweeted Sunday morning that the U.S. "is watching very closely for human rights violations!"

Sen. Lindsey Graham of South Carolina is one of the Republican Party's most influential foreign policy voices and an ardent critic of Iran. He joined "Face the Nation" to discuss the demonstrations, how the U.S. should respond and the prospects for change in the country. He also weighed in on the tumultuous past year in politics and looked ahead at what we can expect as we head into 2018.

The following is a transcript of the interview with Graham that aired Sunday, Dec. 31, 2017, on "Face the Nation."

MAJOR GARRETT: We begin this morning with Republican senator Lindsey Graham. He joins us from Clemson, South Carolina where I suspect one or two residents have a rooting interest in tomorrow night's Sugar Bowl. Senator, great to have you with us. Let's get straight to the situation--

MAJOR GARRETT: --in Iran. What is the import of these demonstrations on the street, and what should President Trump do or say about them?

LINDSEY GRAHAM: Well, it tells us that the Obama approach of relieving sanctions, hoping the regime would moderate, has failed. The people are not getting the benefit of sanctions relief. They're more upset with their oppressors than ever. The money from sanction relief has gone into rebuilding the Iranian military, and they're destabilizing the Mideast.

So if I were President Trump I would have a nationwide address pretty soon explaining why the Iranian nuclear deal is a bad deal for the world, what a better deal would look like, and urge Congress and the European allies to get a better deal with Iran -- before it's too late.

MAJOR GARRETT: And the-- purpose of that national address would be to-- take note of this moment and put the United States four square on behalf and behind those people protesting in the streets? Some have said that would be the wrong thing to do because that would give the regime an enemy to point at. Us, again.

The Iranian people are not our enemy. The Ayatollah is the enemy of the world. Here's what I would do if I was President Trump. I would explain what I-- what a better deal would look like. It's not enough to watch. President Trump is tweeting-- very sympathetically to the Iranian people. But you just can't tweet here. You have to lay out a plan.

And if I were President Trump I'd lay out a plan as to how I would engage the regime. I would tell the Europeans and the Congress and the world that America's going to withdraw from this agreement unless it's a better deal, and I'd lay out what a better deal would look like. And I would stand with the Iranian people the entire time.

MAJOR GARRETT: Have you conveyed this personally to the president?

LINDSEY GRAHAM: I just did.

MAJOR GARRETT: Okay, very good. Sometimes you could do that by phone and I'm just curious about that. North Korea, let's talk about that. You said recently that if there is another missile test or-- a nuclear weapons test in North Korea, there's a 70% probability we will attack North Korea. 70%. That's a higher risk level than anyone I've talked to has placed-

MAJOR GARRETT: -on that issue. Why is it so high?

LINDSEY GRAHAM: I said if there's a nuclear weapons test it goes from 30% to 70%. It's based on a lot of time with President Trump. He made a decision early on to deny the North Korean regime the capability to hit America with a nuclear-tipped missile. There's two things he could have done.

He could have given them the capability to hit America and tell them, "If you ever use it I'm going to blow you off the map." That's called containment. He rejected that idea because you can't contain North Korea. They will sell anything they make if they don't use it. So he's in the camp of denial.

He's told the North Koreans, "I will deny you the capability to hit America with a nuclear-tipped missile." If they test another bomb they're closer to having that capability. "And as a last resort, I will use military force to stop you." Now, the Iranians are watching us in North Korea. North Korea's watching us in Iran. 2018 will be a year of opportunity and extreme danger.

The president has drawn a line in North Korea telling the regime, "I will never let you hit America with a nuclear-tipped missile. If I have to, I'll use military force to stop you." Now, the Iranians are watching the way he engages with North Korea, and vice versa. So we've got a chance here to deliver some fatal blows to really bad actors in 2018. But if we blink, God help us all.

MAJOR GARRETT: What I hear you saying, Senator, is 2018 is the year of preemptive strikes.

LINDSEY GRAHAM: 2018 is going to be the year to deny North Korea the capability to hit the homeland. Sanctions will never work completely without the threat of credible military force. How do you change a man's behavior who's willing to kill his own family, torture his own people to stay in power? He's living large, and he could care less about his people. The only way he'll change his behavior, if he believes Donald Trump would use military force to destroy his regime. And the Iranians are watching how Trump deals with North Korea.

You'll ask me in a minute how my relationship has evolved with the president. It's evolved because he is president of the United States. He beat me like a drum, and I want to help him where I can because there's a lot on this man's plate and we should all want to help him.

MAJOR GARRETT: What have you learned about him that makes him different and more-- someone you want to work with and can work with than he was when you said he was unfit for office and quite possibly a kook?

LINDSEY GRAHAM: Yeah, I said everything. I said he was a xenophobic, race-baiting, religious bigot. I ran out of adjectives. Well, the American people spoke. They rejected my analysis, and he is now my president. I worked with President Obama where I could, with President Bush even though I supported Senator McCain. The bottom line: he is president of the United States. I've gotten to know him better. He asks a lot of good questions.

I think he's made good foreign policy choices. He's now arming the Ukraine. Long overdue. He's got the right policy to deny North Korea the ability to hit America with a nuclear-tipped missile. And he is now on the side of the Iranian people. But he has to do more than watch. He actually has to act. And if I were him I would withdraw from the nuclear agreement with Iran next year if it's not made better by the Congress and our European allies.

MAJOR GARRETT: I'm going to give you two minutes and three topics, senator.

LINDSEY GRAHAM: Okay. We can do this.

MAJOR GARRETT: Health care, DACA, and how is Senator McCain?

LINDSEY GRAHAM: Senator McCain is in rehab. He's coming back in January. We need his voice now more than ever. Health care, there's a debate between federalism and socialism. I don't know of one Republican who wants to repair Obamacare. I don't know one Democrat who wants to replace it. So we're not going to come together on health care.

On DACA, there is a deal to be had. The Dreamers can have the life they dreamed of if the Democrats and Republicans can give. We need the wall, not a complete 2,200-mile wall. We need border security. Marry that up with the Dream Act. There's a deal to be had on immigration, and I want to do it in January. I don't want to wait until March.

MAJOR GARRETT: We've got a minute and a half. That was a lightning round and you did a spectacular job. So--

MAJOR GARRETT: The New York Times reported this week that George Papadopoulos, a foreign policy advisor to the Trump campaign, had a booze-filled encounter in London with an Australian diplomat. And that's where this whole investigation began. Not the dossier.

LINDSEY GRAHAM: No, the dossier, I want a-- I want somebody to look at how the Department of Justice handled the dossier. As to the Russia investigation, I don't think it hurts our country to look at what Russia did in our election. As a matter of fact, it would hurt us if we ignored it. There's no evidence of collusion between the Trump campaign and the Russians yet. But it will be up to Mr. Mueller to make that decision. Some Democrats want to impeach the president. He's denied any collusion.

Here's what I want to happen: Mr. Mueller to do his job, without interference. And I want somebody to look at the way the Department of Justice used this dossier. It bothers me greatly the way they used it, and I want somebody to look at it. But 2018, this investigation will go forward. It will be-- an investigation conducted without political influence. And the president needs to focus on his day job. I need to focus on being a senator. And we all need to let Mr. Mueller do his job. I think he's the right guy at the right time.

LINDSEY GRAHAM: Same to you. Thank you.