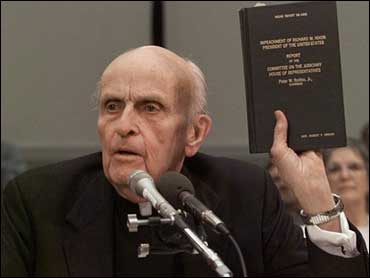 The Rev. Robert Drinan, a Jesuit who — over the objections of his superiors — became the first Roman Catholic priest to serve as a voting member of the U.S. Congress, died Sunday.

Drinan, 86, had suffered from pneumonia and congestive heart failure during the previous 10 days, according to a statement by Georgetown University.

"His death was peaceful, and he was surrounded by his family," said the Rev. John Langan, rector of the Georgetown University Jesuit Community where Drinan lived.

An internationally known human-rights advocate, Drinan represented Massachusetts in the U.S. House for 10 years during the turbulent 1970s, and he stepped down only after a worldwide directive from Pope John Paul II barring priests from holding public office.

He was elected in 1970. The only other priest to serve in Congress was a nonvoting delegate from Michigan in 1823.

Although a poll at the time showed that 30 percent of the voters in his district thought it was improper for a priest to run for office, Drinan considered politics a natural extension of his work in public affairs and human rights.

His run for office came a year after he returned from a trip to Vietnam, where he said he discovered that the number of political prisoners being held in South Vietnam was rapidly increasing, contrary to U.S. State Department reports. In a book the next year, he urged the Catholic Church to condemn the war as "morally objectionable." He ran for Congress on an anti-Vietnam war platform.

During his Congressional tenure, Drinan continued to dress in the robes of his clerical order and lived in a simple room in the Jesuit community at Georgetown.

But Drinan wore his liberal views more prominently. He opposed the draft, worked to abolish mandatory retirement and raised eyebrows with his more moderate views on abortion and birth control.

And he became the first member of Congress to call for the impeachment of President Richard Nixon — although the call was not related to the Watergate scandal, but what Drinan viewed as the administration's undeclared war against Cambodia.

Decades later, at the invitation of Congress, he testified against the impeachment of another president: Bill Clinton. Drinan said Clinton's misdeeds were not in the same league as Nixon's, and that impeachment should be for an official act, not a private one.

Drinan left office in 1980 — "with regret and pain" — finally succumbing to the increased pressure from his superiors, including the Pope.

But he continued to be active in political causes. He served as president of the Americans for Democratic Action, crisscrossing the United States giving speeches on hunger, civil liberties, and the perils of the arms race. He spoke out against President Reagan and President George H.W. Bush, and lectured and wrote about gun control, world hunger, and the war on terrorism's impact on human rights.