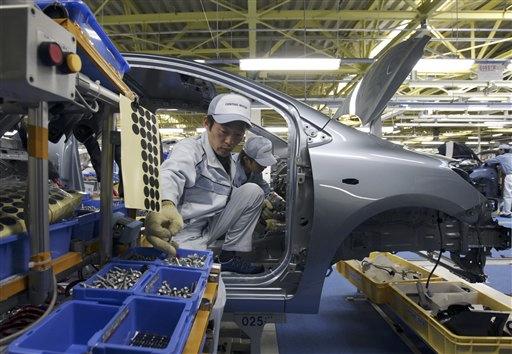 OHIRA, Japan (AP) - Toyota celebrated the opening of an auto plant in a forsaken rural area of central Japan on Wednesday - its first new Japanese factory in 18 years that promises to grow into a significant production base for the world's largest car maker.

Dotted with rice paddies and sometimes covered by snow, the Tohoku region where the new Toyota plant is located is the true boondocks of Japan.

Moving more production to countries with lower wages like Thailand, China and India has become a tempting and often necessary strategy for Japanese automakers to stay competitive, especially amid a strong yen, which makes goods made in Japan more expensive overseas.

"This is bringing hope and energy to the future of Tohoku," Yoshihiro Murai, governor of the prefecture (state) where the plant is located, told a crowd at the ribbon-cutting ceremony.

A shiny red Yaris compact sedan, set for export to North America and the first to roll off the line, was presented in a puff of smoke as "Thus Spoke Zarathustra" rang out and curtains opened on a stage at the plant.

"This is like a dream come true," said Masahiro Atobe, mayor of Ohira, the plant's home town of 5,500 residents.

He acknowledged he had been worried the plans would be ditched after the financial crisis hit, sending auto demand plunging in the U.S., a crucial market for Toyota Motor Corp.

The rising yen was another concern, he said. The dollar sank from about 90 yen last year to nearly 80 yen at one point in recent months, although it has recovered to about 83 yen.

Now, Atobe is all smiles.

"We are so lucky the plant is opening in the Year of the Rabbit, which signals a leap toward achievement," he said.

The new plant is part of a larger move by Japanese automakers to try and keep jobs in Japan by cutting production costs even though auto demand here has long been stagnant.

Toyota Executive Vice President Atsushi Niimi declined to say if the plant will start making hybrids, as some Japanese media have speculated. But he said having Japan plants produce hybrids and plug-ins would be one solution to adding value to the plants.

The factory is set to start producing the Corolla for both the Japanese and North American markets in April.

It is designed to be more compact and energy-efficient than comparable old-style Toyota plants. Reporters were given a tour of some of the innovations Wednesday.

Instead of hanging from above on the assembly line, the cars move on a conveyor belt side by side, instead of one after the other, so that the line can be shorter and workers don't have to move around as much.

Such penny-pinching innovations will be introduced in other plants, including overseas, and become central toToyota quality production, Niimi said.

"We want to make cars that can compete in pricing and quality in the world, and we are confident we can do it," he said.

Thirty-three year-old plant worker Tsuyoshi Koga, who like many of the plant's employees moved from an old Toyota plant near Tokyo, said he was thrilled.

"I love it. As the old saying goes, wherever you make your home is your castle," he said. "The seafood and golf courses are great in this area."