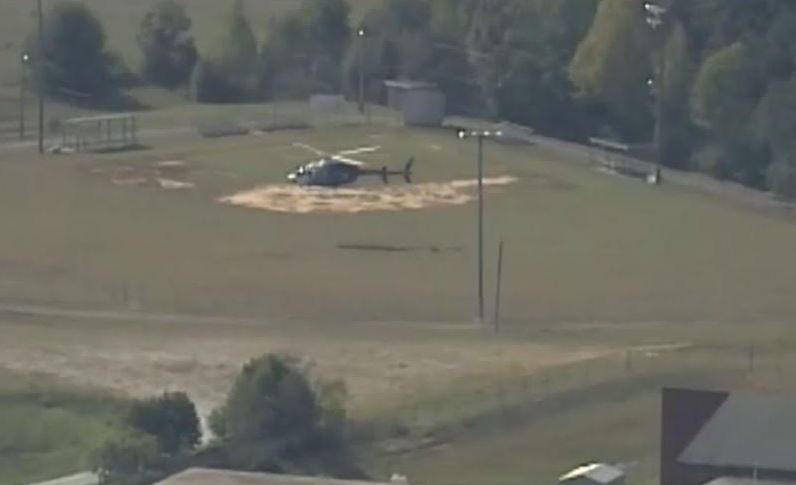 One of the victims has been identified as Jacob Hall, 6, according to WSPA. He is listed in critical condition at Greenville Memorial Hospital.

“We appreciate the community’s support, especially the Townville Rescue Squad who treated Jacob onsite and brought him to the hospital,” said Rodger and Renae Hall, Jacob’s parents, in a statement. . “We appreciate everyone’s thoughts and prayers and ask for privacy during this difficult time.”

911 dispatchers received the initial call around 1:45 p.m. from a teacher who was in a classroom, reporting an armed male on the campus, officials said at a press conference Wednesday evening.

The other boy and a female teacher were in good condition, said Juana Slade, spokeswoman for AnMed Health Medical Center.  Both boys were 6 years old, the Independent Mail reported.

Anderson School District 4 superintendent Joanne Avery said the gunman was apprehended “within a matter of minutes.” Capt. Garland Major of the Anderson County Sheriff’s Office said officers arrived within seven minutes of the 1:45 p.m. 911 call and had the suspected shooter, a teenager, in custody by 2 p.m. The gunman was tackled by a volunteer Townville firefighter, the station reports.

Avery said she was “heartbroken about this senseless act of violence” but credited the quick law enforcement response and frequent school active shooter trainings with preventing more injuries.

Police are also investigating a homicide scene about two miles from Townville Elementary School, where a man was found dead from gunshot wounds at a home, according to Anderson County Coroner Greg Shore. The 47-year-old victim in that case is the father of the teen suspect in the elementary school shooting, Shore said. Officers found the man dead after receiving a 911 call from his family shortly after the shooting at the elementary school.

The incidents are believed to be connected, law enforcement said.

Parents were told by text message to come to the school, and not told whether their children were alive or dead.

“I’m glad that my children are safe, thank you Jesus,” one father told CBS News. “I didn’t know what happened -- the school called me twice. I called my wife and she’s at home so she rushed to the school.”

“I really don’t want to come back to the school tomorrow,” Townville Elementary School student Alyssa Cox told CBS News. “Because you don’t know if you can trust it or not.”

The school is in a rural area near Lake Hartwell, which is located near Interstate 85 and the Georgia state line.  The superintendent told CBS News the school has had several active shooter drills in the past few years.

Dozens of officers from multiple jurisdictions were seen searching the school and evacuating students. By early Wednesday evening, the evacuated students had been released to their parents. Police have not released the name of the teen or any of the victims.

Officials said they feel confident the teen is the sole shooter, and say the community is not in danger.

It wasn’t immediately clear how the alleged gunman, who was armed with a handgun, entered the school grounds. Deputy Chief Keith Smith told the station the incident happened on the playground behind the school and the shooter didn’t enter the building.

Officials said Thursday the teen was home schooled and it wasn’t clear if he’d ever been a student in the district. Nor was it clear whether the gunman had any kind of relationship with the students or teacher, or whether he targeted the victims.

Major said both the shooter and the victims where white, and said investigators so far had no indication there were any racial motivations or connections to terrorism. Investigators had a large crime scene to process and still hadn’t entered the home where the alleged shooter’s father was found dead, he said.

“This is going to be a very slow, methodical and meticulous investigation,” Major said. “We’re not going to have all the answers at one time.”

South Carolina Governor Nikki Haley was delayed on her way to Townville, but posted a statement to Facebook as she traveled.

School would be canceled for the rest of the week and grief counselors would be made available, Avery said.