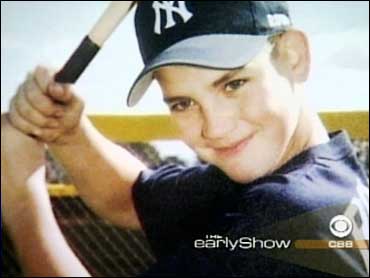 A 13-year-old California boy has been charged with murder after allegedly beating a friend to death with a baseball bat, reports CBS News Correspondent Bill Whitaker.

In Palmdale, he says, they're trying to understand the incomprehensible: why a scared 13-year-old may have used his bat as a weapon, and why his 15-year-old friend lay dead.

"I was just stunned and I don't know why anybody would do that," says a friend, Trevor Bloom.

It seemed to start innocently enough, by the snack bar, after a Pony League baseball game. Witnesses say Jeremy Rourke, 15, was needling and shoving the younger player for pitching a losing game when the 13-year-old seemed to snap.

Witness Sam Cordova says, "They were kinda teasing each other, and the next thing you know, the boy pulled out a bat and he kinda hit him once in the side and once up around the neck, and then he just hit him really with tremendous force to the head. …His head just sounded like a pumpkin getting hit with a bat."

Jeremy loved baseball and, Whitaker notes, was known to get into neighborhood fights.

His alleged murderer was a family friend.

"She made the comment that, by no means was this kid a monster – that he was a very good kid. They were friends, in fact," says Rick Scheid, a friend of the victim's family.

This is a town of single-family households that come together over community sports.

It's like a family, says Kelly Unger, a neighbor who knew both boys. The Palmdale family is now in pain: "Two lives, two families are ruined."

One is facing the prospect their 13-year-old son may be locked away until age 25, another is planning a funeral.