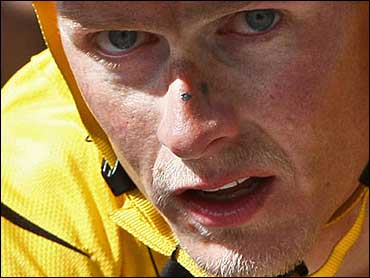 Tour de France leader Michael Rasmussen was removed from the race by his Rabobank team after winning Wednesday's stage, the biggest blow yet in cycling's doping-tainted premier event.

The expulsion, which Bergsma said was ordered by the Dutch team's sponsor, was linked to "incorrect" information that Rasmussen gave to the team's sports director over his whereabouts last month. Rasmussen missed random drug tests on May 8 and June 28.

The 33-year-old Danish rider, who's led since July 15, looked set to win the race which ends on Sunday in Paris.

As Rasmussen crept toward what would have been his first Tour victory, race directors repeatedly said he never should have been allowed to take the start on July 7 in London, England.

"We cannot say that Rasmussen cheated, but his flippancy and his lies on his whereabouts had become unbearable," Tour director Christian Prudhomme told The AP, reacting to Rasmussen's withdrawal.

The head of cycling's governing body applauded the decision.

"My immediate reaction is, why didn't they do this at the end of June, when they had the same information," International Cycling Union president Pat McQuaid told The AP.

"The team decided to pull him out — that's their prerogative. I can only applaud that. It's a zero-tolerance policy and it's a lesson for the future."

With Rasmussen out, Spanish rider Alberto Contador of the Discovery Channel moves into the race lead.

"It's in no way a celebration on our end. It's the third piece of bad news," said Discovery Channel spokesman P.J. Rabice. "It reflects badly on our sport."

After the Tour's upbeat start in London, when millions of spectators lined streets to watch, bad news — nearly all of it related to doping — quickly dominated.

German rider Patrick Sinkewitz crashed into a spectator then was revealed to have failed a drug test in training before the race began. Star Alexandre Vinokourov was sent home after testing positive for a banned blood transfusion. On Wednesday, as Rasmussen was riding toward his win in the 16th stage, the Cofidis squad confirmed that its Italian rider Cristian Moreni failed a doping test, prompting the withdrawal of the entire squad.

In a race as old as the 104-year-old Tour, it wasn't immediately clear whether the race had ever lost its leader in such fashion so close to the finish. But in recent memory, Rasmussen's case appeared without precedent.

"In the very old history of the Tour de France, I don't know, but the recent past — never," said Tour spokesman Philippe Sudres.