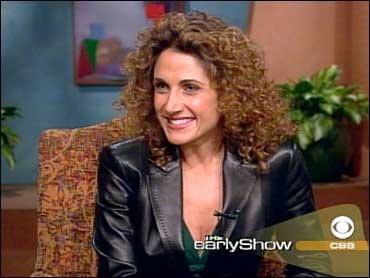 When you're the star of a hit TV show, it's not always easy to fit in time you're your family amid the heavy demands of filming.

Melina Kanakaredes of "CSI: New York" does it by thinking outside the box.

Kanakaredes, who plays tough-as-nails detective Stella Bonasera, was born and raised in Akron, Ohio. and now lives in Los Angeles with her husband and two young daughters.

On Wednesday, during "CSI Week" on The Early Show, Kanakaredes

told
co-anchor Hannah Storm how she manages to get quality time with them on the set.

"It's tough," Kanakaredes admitted. "But you know, it's about personal choice and how you make it happen for yourself. Everybody has a different method.

"Ours is — sort of, in the midst of the madness, we have dinner at 6 in my trailer. We just try to stick together.

"They come after school, or my little one comes every day, and it just makes a difference. You know, there's a light that needs to be fixed, so I go over there and have a tea party.

"You balance as much as you can. And then, on the days that mommy's doing unusual things, (the kids) just stay at home."

Kanakaredes said there have been some awfully long stretches on the set lately.

"One day, we had about an 18-hour day. Not just me; the entire crew just doing something that really shakes things up a bit. We were all like hugging each other, saying, 'Wow, that was so fun.' We are like a big family, so it was such an enjoyable time."

Last week's episode offered a rare glimpse at the personal life of Bonasera.

"My character has had a love interest who's a nice sculptor, seemingly wonderful," she told Storm. "She saw that he had been filming them having sex in his apartment which, as a detective, you know, it's kind of like the doctor who's a horrible patient. 'How did I not see this coming?' She was equally as angry at herself as she was at the situation.

"And horrified as a woman and as a person, having been violated in that way. And so, clearly, she breaks up with him right away."

Then Stella is attacked by him and ends up killing him — and then is booked for murder.

"What's amazing," Kanakaredes told Storm, "is that the whole process of turning the table on an actor, and on a character, on a person, is kind of what happens in life, which is sort of delicious: You now are the person who's being fingerprinted and questioned, and why did you shoot him three times when he was already dead at two bullets?

"My favorite line is, 'I just kept firing the gun until I felt safe.' And it's really interesting to see the vulnerability in a human being who's so tough all the time.

"It makes her better at her job because now, the person — victims — aren't going to be looked at by Stella the same way ever again."