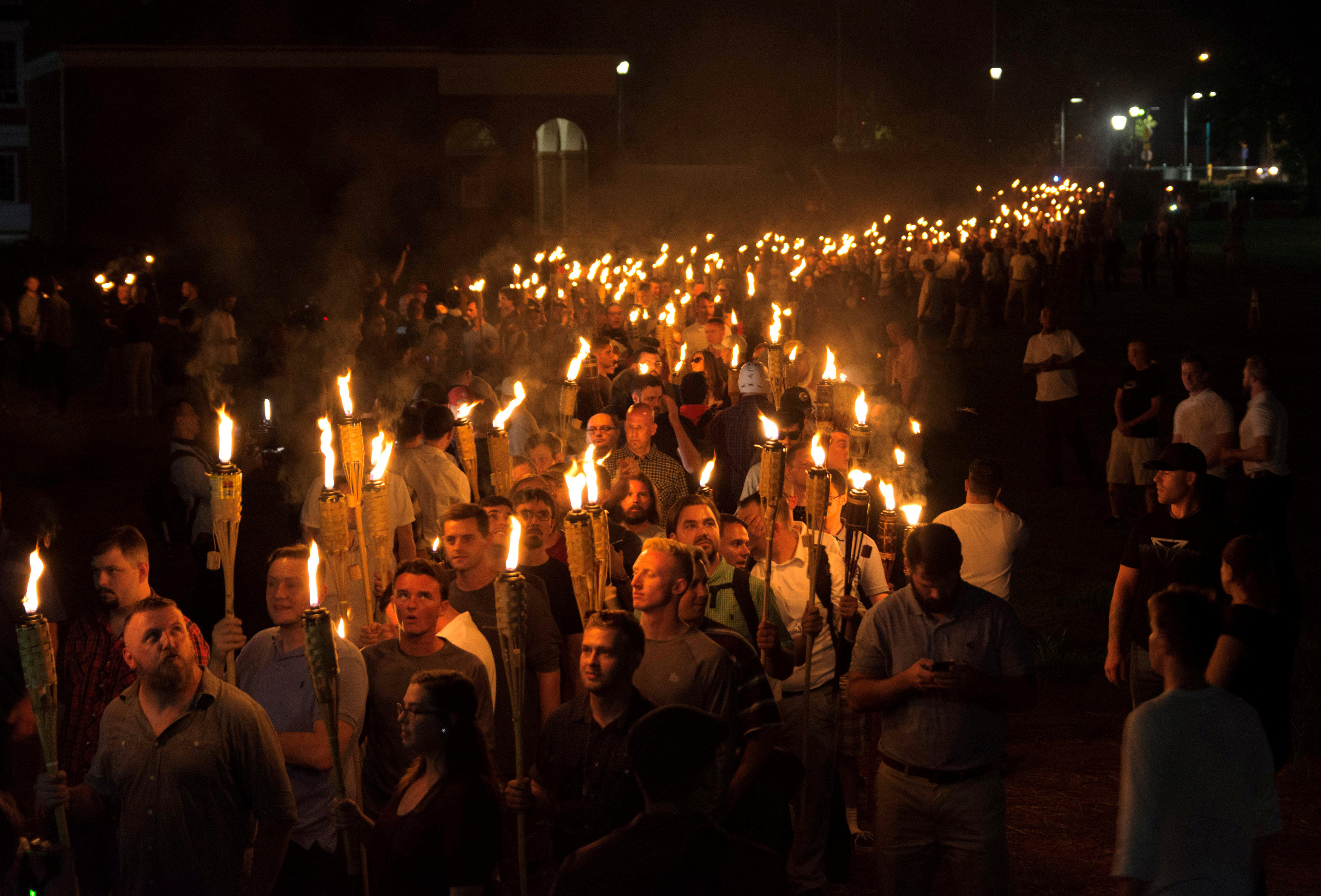 Violence broke out Friday night as a large crowd of white nationalists marched through the University of Virginia (UVA) campus carrying tiki torches and chanting "you will not replace us."

The group marched ahead of a demonstration planned for Saturday to protest the removal of a statue of Confederate General Robert E. Lee. A federal judge issued a ruling Friday night allowing the Saturday rally to go forward.

Friday's march began around 10 p.m. at an intramural field and the crowd proceeded to a statue of Thomas Jefferson on the UVA campus. Jefferson founded the university in 1819.

Police arrived on the scene and declared the assembly unlawful. Fights broke out between the two groups of demonstrators, with some marchers swinging their torches. University police said one protester was arrested and charged with assault and disorderly conduct. Police said several people reported injuries, including one police officer.

The university police said officers did not deploy pepper spray, and suggested the protesters themselves may have used the chemical.

Teresa Sullivan, the president of UVA, denounced the march in a statement Friday night.

"I am deeply saddened and disturbed by the hateful behavior displayed by torch-bearing protesters that marched on our Grounds this evening," she wrote. "The violence displayed on Grounds is intolerable and is entirely inconsistent with the University's values."

Charlottesville Mayor Mike Signer called the march "a cowardly parade of hatred, bigotry, racism, and intolerance march down the lawns of the architect of our Bill of Rights."

"Not only as the Mayor of Charlottesville, but as a UVA faculty member and alumnus, I am beyond disgusted by this unsanctioned and despicable display of visual intimidation on a college campus," Signer, a Democrat, said in a statement.

The white-nationalist protesters are in Charlottesville for the "Unite the Right" rally on Saturday, where officials expect between 2,000 to 6,000 people to attend the protest against the removal of the Lee statue from the city's Emancipation Park, according to the Daily Progress, a newspaper in Charlottesville. More than 1,000 first responders officers will be on hand for the event, the Daily Progress reported.

The rally is being organized by Jason Kessler, a right-wing blogger. Kessler sued the city after officials said the rally must be moved from its planned location in the park. A federal judge sided with Kessler Friday night, ordering the city to allow the demonstration to go forward. The city said in a statement it would abide by the judge's order.