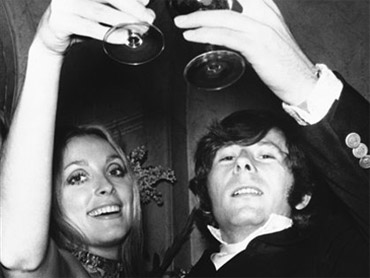 A topless photo of filmmaker Roman Polanski and his wife, Sharon Tate, taken just months before her death has sold at a New York City auction for $11,250.

The black and white portrait by British photographer David Bailey shows the couple embracing. Christie's says it was sold Monday to an unidentified private buyer. The presale estimate was $8,000 to $12,000.

The 76-year-old Oscar-winning director of "The Pianist" is under house arrest in Switzerland. The United States wants him to face sentencing for having sex with a 13-year-old girl in 1977. He fled the U.S. before being sentenced.

His attorneys plan to argue before a California appeals court that the charges should be dismissed.

Tate was murdered in 1969 by followers of Charles Manson.