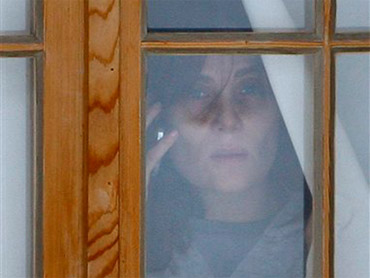 Roman Polanski began his house arrest on $4.5 million bail Friday, rolling into the luxury resort of Gstaad in a police convoy to a warm welcome from his wife and children at his Alpine chalet.

Polanski persuaded Swiss authorities to end his two months of incarceration in a Swiss jail pending their decision on whether to extradite him to the U.S. in a 32-year-old sex case.

Polanski's family had been waiting eagerly at the chalet, peeking out the windows to look for him as Swiss authorities worked out the last-minute details of his transfer. He has two children - Elvis, 9, and Moorage, 16 - with his wife, French actress Emmanuelle Signer.

Two police cars went straight into the garage which has direct access to the inside of the house. Polanski was unseen behind the vehicles' tinted windows, but police told The Associated Press that he was inside.

"Roman Polanski was today released from custody pending extradition and transferred to Gstaad, where he is under house arrest at his chalet," the Swiss Justice Ministry said. "Polanski has undertaken not to leave his house and property at any time."

Police in gray and blue jackets and private security guarded his property. Red-and-white striped police security tape and a wooden fence marked out an area around the house that was closed to strangers.

The 76-year-old director won't be allowed to leave his house while Switzerland decides whether to extradite him to the U.S. for having sex in 1977 with a 13-year-old girl. He will have to wear an electronic monitoring bracelet.

The director of "Rosemary's Baby," "Chinatown" and "The Pianist" has been in Swiss custody since being arrested Sept. 26 on a U.S. warrant as he arrived in Zurich to receive a lifetime achievement award at a film festival. Authorities in Los Angeles want him returned to be sentenced after 31 years as a fugitive.

Polanski was initially accused of raping the girl after plying her with champagne and a Quaalude pill during a modeling shoot. He was indicted on six felony counts, including rape by use of drugs, child molestation and sodomy, but he pleaded guilty to the lesser charge of unlawful sexual intercourse.

In exchange, the judge agreed to drop the remaining charges and sent him to prison for a 90-day psychiatric evaluation. The evaluator released Polanski after 42 days, but the judge said he was going to send him back to serve out the 90 days.

The filmmaker fled the U.S. on Feb. 1, 1978, the day he was to be formally sentenced. He has lived since then in France, which does not extradite its citizens.

Polanski claims that the U.S. judge and prosecutors acted improperly in his case. His attorneys will argue before a California appeals court in December that the charges should be dismissed.

(AP Photo/Jean-Christophe Bott)
Swiss officials say Polanski has transferred the bail and deposited all identification and travel documents with the Zurich cantonal police. His house in Gstaad, seen at left, has been fitted with an electronic monitoring system that will trigger an alarm if Polanski leaves the house or removes the tagging bracelet.

Should Polanski violate the terms of his release, bail will be forfeited.