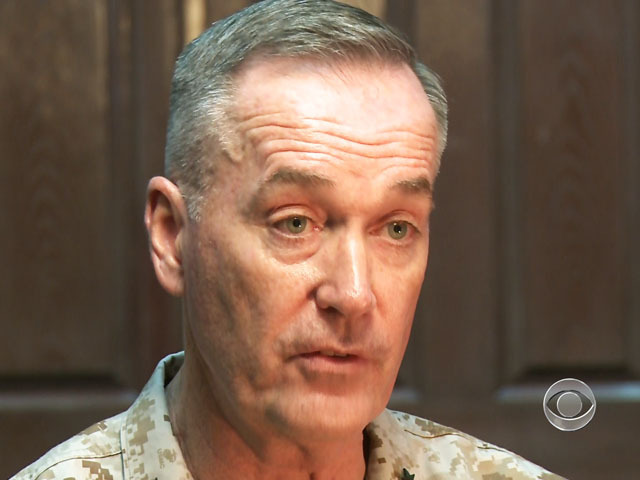 (CBS News) KABUL -- The war in Afghanistan is entering an uncertain and dangerous phase. The Obama administration is trying to figure out how to bring most U.S. forces home by the end of next year, but still leave enough to be sure Afghanistan does not slip back into chaos.

The new man in charge of that is a Marine Corps general known as "Fighting Joe" Dunford. He took over command of U.S. and NATO forces two months ago.

Watch: Elizabeth Palmer reports on the uncertainty that remains as war in Afghanistan winds down, below.

We met Joseph Dunford at his headquarters just as he's preparing to tell President Obama how many Americans he'll need past 2014. The U.S. -- unofficially -- has hinted at around 9,000.

"In these next couple of months, I expect those decisions to be made, and I think -- I believe we'll know by the summer, generally speaking, what the future is," he said. "And the president of the United States and the president of Afghanistan are certainly committed to try to get this bilateral security agreement done by the May-June time frame."

The Americans who stay will be trainers for Afghanistan's military and special operations forces for counterterrorism.

Asked how many personnel will stay, Dunford said, "I haven't yet provided my advice for the president on this."

"I have a feel for it, but not one I'm willing to discuss," he said with a smile. "I would not tell you before President Obama."

Dunford commands more than 100,000 NATO troops. Pulling a large number out - what the military calls "retrograding" -- will be a monumental operation.

Dunford said he worries he won't provide that leadership.

Asked to name the second thing on his list, he said, "I think the confidence of the Afghan people is very important to me. As I mentioned, there's a dynamic of uncertainty, so what I want to make sure we're demonstrating the kind of commitment that will lead to Afghan confidence."

But he has little more than 600 days left to make Afghanistan confident and stable enough to go it largely on its own.

"We came here because there was a threat of international terrorism from this region," Dunford says when asked what he can do in the time he has left to justify the cost -- in dollars and lives -- to America. "And we haven't yet set the conditions where that won't occur again."

We asked Dunford whether America is winning in Afghanistan. He told us U.S. forces have given the country an opportunity. And by that measure, he said, yes, we're winning.