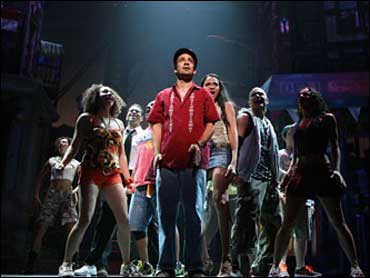 "In the Heights," a joyous celebration of Latino life in the upper reaches of Manhattan, was named best musical at Sunday night's Tony Awards, while "August: Osage County," Tracy Letts' scabrous tale of a dysfunctional Oklahoma family, took best play.

Bartlett Sher, who oversaw "South Pacific," thanked the show's legendary creators, composer Richard Rodgers, lyricist Oscar Hammerstein II, its original director Joshua Logan and James Michener, who wrote the novel on which the show was based.

"They were kind of incredible men, because they seem to teach me particularly that in a way I wasn't only an artist but I was also a citizen," Sher said. "And the work that we do in these musicals or in any of these plays is not only important in terms of entertaining people, but that our country was really a pretty great place, and that perhaps it could be a little better, and perhaps, in fact, we could change."

Yet "Gypsy," the main competition for "South Pacific," could cheer, too. It took three of the four musical performance awards.

Patti LuPone was cheered mightily as she won the actress-musical prize for her powerhouse performance as Rose, an indomitable stage mother. It was LuPone's second Tony, the first since 1980 when she won for playing another strong-willed woman, Eva Peron, in "Evita."

Her co-star, Boyd Gaines, did even better. He collected his fourth Tony, winning for his portrayal of Rose's gentlemanly candy-salesman suitor, Herbie. And Laura Benanti, who plays the ugly-duckling daughter who blossoms into Gypsy Rose Lee in the show, received the featured-actress award.

"It's such a wonderful gift to be an actor who makes her living on the Broadway stage and then every 30 years or so picks up one of these," said an exuberant LuPone. "I was afraid to write a speech, because I had written a couple before and they never made it out of my purse. So I'm going to use one of the old ones and add a few names."

The win for "August" was not unexpected since it already has won most major theater awards including the Pulitzer Prize for drama and the New York Drama Critics' Circle Award. It won five Tonys, all told, Sunday.

Thanking the show's producers, Letts said: "They did an amazing thing. They decided to produce an American play on Broadway with theater actors."

Deanna Dunagan, who portrays the play's acidulous matriarch, took the actress prize while Rondi Reed, who plays her flighty sister, won in the featured category.

"This is so overwhelming," Dunagan said. "This whole year has been entirely unexpected and astonishing. ... After 34 years in regional theater, I never thought about it (the Tonys). I watched it on television like everybody else."

"If you're really followed by a star, Tracy Letts hands you 'August: Osage County' and says, 'Wanna?' Then heaven opens up and you get the greatest cast you will ever work with in your entire life," said a tearful Shapiro.

Rylance, who plays a nerdy visitor to Paris in the comedy, didn't give an acceptance speech rife with thank-yous. Instead, he riffed about wearing clothing appropriate to your vocation or avocation.

"Otherwise, it might appear that you don't know what you're doing, that you're just wandering the earth, no particular reason for being here, no particular place to go," he said. "Thanks very much for this."

Lin-Manuel Miranda, who wrote the music and lyrics for "In the Heights," rapped his way through his acceptance speech for best score, saying: "I know I wrote a little show about home. Mr. Sondheim, look, I made a hat. (a reference to a lyric in Sondheim's 'Sunday in the Park with George') But there never was a hat - it's a Latin hat at that!"

And "In the Heights" managed two other musical prizes - for the choreography of Andy Blankenbuehler and for orchestrations.

But Stew, the star and co-creator of "Passing Strange" took the prize for best book of a musical.

"Yeah, yeah. Um. Yeah," said the almost speechless performer, who did not expect awards to be given out so early. "I thought this going to happen like an hour from now. I was looking for some M&Ms in my pocket."

Jim Norton, who played a cantankerous blind Irishman in "The Seafarer," took the featured actor-play prize and told the audience: "This has to be one of the happiest days of my life. I can't believe it."

The CBS telecast from Radio City Music Hall opened with an elaborate number from Disney's "The Lion King," now in its second decade on Broadway, and finished with host Whoopi Goldberg, walking out dressed as the crab from another Disney musical "The Little Mermaid."

In a season that offered 36 productions, 23 of them were plays - 10 new works and 13 revivals. But despite the abundance of plays, it was a disconcerting year for Broadway. A crippling 19-day stagehands strike last November shut down more than two dozen shows during a particularly lucrative time of year, resulting in millions of dollars in losses. The strike most likely prevented the theater from having its first-ever billion-dollar season.

The total gross for the season, according to the Broadway League, was $937.5 million, about a million dollars shy of the previous year. Attendance slipped slightly, too, to 12.27 million, down from 12.3 million in the preceding season.