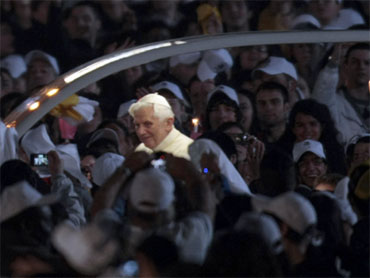 A top Vatican cardinal is calling for "housecleaning" and urging the Roman Catholic Church to be more alert and brave in dealing with cases of clerical sex abuse.

Cardinal Walter Kasper has also defended the pope, saying he was the first to recognize the need for a harsher stance against offenders. He says attacks on Pope Benedict XVI go "beyond any limit of justice and loyalty."

The sex abuse scandal has moved across Europe and into Benedict's native Germany. It has touched the pontiff himself with a case dating to his tenure as archbishop of Munich.

Kasper said in an interview published Saturday in the Italian daily newspaper Corriere della Sera that the church needs to be more vigilant. He said the path the church is on is "irreversible."

The Pain in Verona

The memories are still painful for the men who appeared on Italian television last night, and the revelations add to the pain of a church and a pope under siege.

CBS News correspondent Mark Phillips reports that the latest allegations of abuse aimed at another catholic institution are now getting closer to Rome, and to the pope himself.

On Friday, Italian television aired allegations from men who, as children, attended a Catholic school for the deaf in Verona, where they say they were repeatedly abused.

At first the local bishop accused them of lying, until one of the staff admitted the allegations were true.

The bishop then ordered an internal investigation, which found some abuse occurred, albeit a fraction of what had been alleged.

Advocates for the self-described victims, however, said the diocese investigation was fatally flawed because no one interviewed the former students.

In a signed statement last year, the 67 former pupils at a school for the deaf in Verona described sexual abuse, paedophilia and corporal punishment from the 1950s to the 1980s. 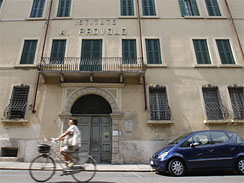 (AP Photo/Luca Bruno)
They named 24 priests, brothers and lay religious men at the Antonio Provolo Institute for the Deaf (pictured, left, in a June 2009 file photo).

Only now - a year after the Italian case became public - is the Vatican directing the diocese to interview the victims to hear their testimony about the accusations, The Associated Press learned on Thursday.

While not all acknowledged being "victims," 14 of the 67 wrote sworn statements and made videotapes, detailing abuse, some for years, at the hands of priests and brothers of the Congregation for the Company of Mary.

"When I was 11, the sexual intercourse started, in the dormitory, in the toilets, very often we were sodomized in the toilets. It went on for four years, always," said 60-year-old Gianni Bisoli.

59-year-old Dario Laiti said he was six when he started at the institute. He said that after a year he was "called by two different priests into a dormitory and they took me behind a white sheet and they sodomized me."

The Verona case is just the latest accusation to rock the church and tarnish Pope Benedict XVI who for years headed the Vatican department that deals with sexual abuse cases, the Congregation for the Doctrine of the Faith.

In 2001 Ratzinger issued a directive that requires bishops to report suspected clerical abuse cases to the Vatican, but makes no mention of calling police.

The church establishment has rallied in support of the pope, and an editorial in the Vatican newspaper has called the abuse allegations a clear and ignoble attempt of trying to strike Benedict. But an editorial in the National Catholic Reporter says it's time for the pope to provide straight answers.

The church moves slowly, but the news about child abuse is spreading, creating more and more of a demand not just for apologies, but for justice.

Earlier this week it was revealed that the Vatican halted the investigation of a Wisconsin priest accused of molesting some 200 deaf boys.

The Wisconsin and Verona cases are the latest in a burgeoning abuse scandal on both sides of the Atlantic that now threatens to tarnish the papacy itself.

The office charged with disciplining clergy was long led by Cardinal Joseph Ratzinger, now Pope Benedict XVI, and a church prosecution in the Wisconsin case was stopped after an appeal to Ratzinger.

The Vatican strongly defended Benedict on Thursday and denounced what it said was a concerted campaign to smear him and his aides for a problem that Rome insists is not unique to the Catholic Church.

The Vatican was responding to the release of documents, first reported by The New York Times, that showed how the pope's former office told a Wisconsin bishop to shut down a church trial against the Reverend Lawrence Murphy, a Milwaukee priest accused of molesting some 200 deaf boys from 1950 to 1975.

Murphy died in 1998, two years after Ratzinger first learned of the accusations, and more than 20 years after they came to the attention of the Milwaukee diocese.

While the Vatican has not directly addressed the Italian abuse case, first reported as part of an AP investigation last September, it bears marked similarities to the allegations brought in Wisconsin.

Both involve some of society's most vulnerable: deaf children for whom the admonition "never tell" is easy to enforce because they have difficulty communicating.

And in both, the major priority of church officials grappling with how or whether to discipline accused predators appeared to be protecting the church from scandal.