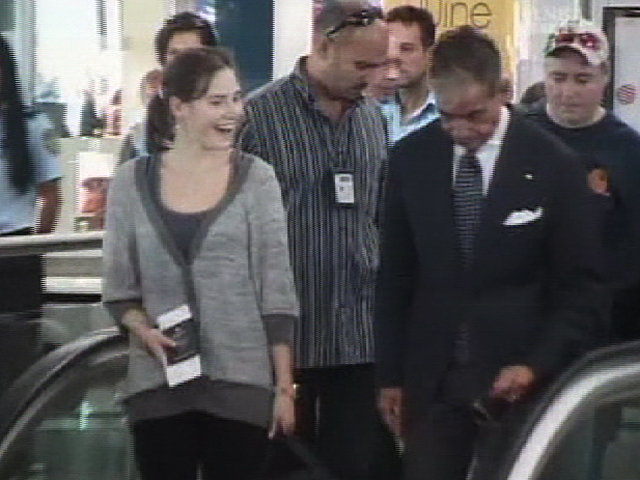 (CBS) - As Amanda Knox heads home to Seattle, a legal expert tells Crimesider Knox may be too emotionally damaged to speak out about her ordeal. Knox is scheduled to arrive at Seattle-Tacoma International Airport  Tuesday evening, where a spokesman for the family says they will hold a news conference.

"I doubt she will talk at the press conference. She needs a lot of time to build up herself," says Luz Nagle, who specializes in international law and international criminal law and is a professor at Stetson University in Florida.

Knox flew from Rome to London, where she boarded a direct flight for Seattle, surrounded by family members. A British Airways attendant on the flight blocked the media from the plane's secluded upper deck "to preserve privacy."

Her departure from Italy comes a day after an Italian appeals court overturned her conviction for sexually assaulting and killing her British roommate 21-year-old Meredith Kercher.

Prosecutor Giuliano Mignini, who has expressed disbelief at the verdict, vowed an appeal to Italy's highest criminal court.

If the highest court overturns the acquittal, prosecutors would be free to request Knox's extradition to Italy to finish out her sentence.

Nagle believes the real reason Mignini is filing for an appeal is because his ego is damaged.

"He led the whole investigation himself and had decided from the beginning that she was guilty," she said. "I think he won't win the appeal."

Earlier, Mignini blamed the media for the appeal trial's outcome.

"This trial was done under unacceptable media pressure. The decision was almost already announced; this is not normal," he said.

But Nagle believes Knox's conviction was overturned because the evidence was not there to convict.

"Doubt was established with the evidence," she said. "There were so many errors."

Now, after four years in Capanne prison just outside of Perugia, Knox is free. Her release has already lead many to speculate about possible book deals and high-paying interviews.

Nagle believes Knox may not be cashing in just yet.

"I believe that after 6 months to a year she'll be strong enough to write a book and give interviews," Nagel explained. " She needs time. The trial has been detrimental to her self-esteem."

Knox, who arrived at the reading of the appeals verdict looking pale and weak, collapsed into tears as the reversal verdict was read after 11 hours of deliberations. At that time, she needed to be propped up by her lawyers on either side.

As for Knox's future, Nagle believes her life may never be normal with all of the media attention she's had.