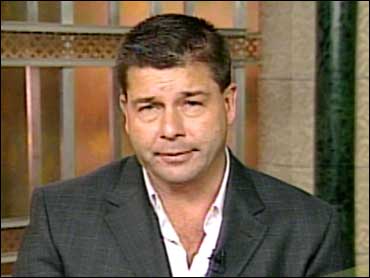 A Canadian journalist held hostage in Iraq for five days says his "almost schizophrenic" treatment ranged from his captors offering him his choice of meals, to blindfolded beatings and other torture.

But Scott Taylor says torture wasn't the only striking thing about his time in captivity: Iraqi police facilitated his abduction, and seemed in cahoots with his captors.

Taylor spent five days earlier this month as a hostage of the Ansar al-Islam terrorist group in northern Iraq.

Taylor told The Early Show co-anchor Harry Smith the most alarming aspects of his time in captivity were the extent of the cooperation he says he observed between insurgents and Iraqi police, and the insurgents' popularity among the populace.

From what Taylor saw and heard firsthand, reports CBS News National Security Correspondent David Martin, the police were collaborating with the insurgency, and even paying protection money to guarantee they would not be attacked.

Not only that, says, Taylor, "(The Iraqi police) were actually willingly encouraging the Muhahdeen in their fight againt the American occupiers."

And that protection money, Martin points out, is part of "what keeps insurgents in bullets."

Taylor says, "They were laughing about this, because it meant that in fact the munitions they were purchasing for the resistance were in fact being bought with American money that was intended for the salaries of the Iraqi police and army that were supposed to be combating the resistance, so they found this rather ironic."

Martin stresses that, if this is the case in other parts of Iraq, "It would be more than ironic. It would spell disaster for the U.S. plan to hold elections in January." That's because it's those same police the U.S. is counting on to provide security for the balloting.

Taylor says he was kidnapped in Tal Afar, after approaching a police checkpoint. He says those police led him directly to a car full of masked gunmen, and turned him over.

"The guy that took us into the car spoke good English and said, 'Don't worry, don't be afraid.'" He turned out to be the leader of the resistance in that city. He was subsequently killed the following night, but he was sitting right next to the police checkpoint, obviously, with full knowledge they knew who he was and he knew who they were."

Later in his ordeal, as his captors drove him and another hostage to the city of Mosul, they encountered more Iraqi police. "They actually welcomed these guy like you would welcome home the local baseball team after a game," Taylor marveled. "These were obviously heavily armed Mujahadeen coming in dusty cars across the desert with captives, evident captives, myself and a Turkish journalist, inside the car. They (the Iraqi police) were giving them cigarettes, giving them water."

Taylor told Smith the insurgents proved popular among man-on-the-street Iraqis, as well. "As we drove through the outskirts of Mosul and other small towns, young boys would come down and line the road in a little gauntlet" to welcome the Mujahadeen.

Taylor added that his captors seemed to have little fear of American forces, even claiming to know the patrol routes of U.S. military helicopters.

He says he was taken aback by "the number of safe houses (insurgents) could take us around to in Mosul, with no fear of the local police because obviously they're on the take or siding with the resistance."