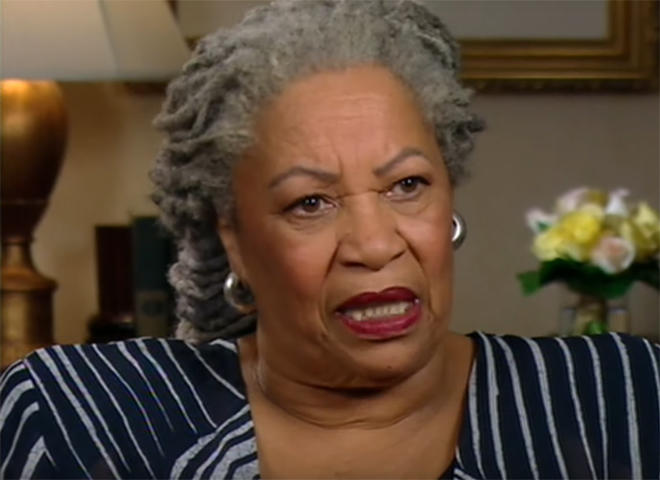 Someone else suggested the title "Love," but Toni Morrison agreed to it, because that's really what her eighth novel is about -- love, in all its permutations.

"There was a lot of danger, I think, a little risk in using a word that empty in a way, and that clichéd," Morrison once said on a radio interview.

But, CBS News Sunday Morning Correspondent Martha Teichner explains, the name "Toni Morrison" on the cover guaranteed "Love" would be anything but a greeting card of a book.

"It became exactly what I wanted the novel to do -- to recast the word, reshape it, and give it back its meaning, its original meaning, or complicate its meaning," says Morrison.

On the talk-show circuit, reading in her velvety voice, she introduced her main character, Bill Cosey.

In the days before desegregation, Bill Cosey owned the finest resort in the country for African-Americans -- a haven for the black bourgeoisie that had quietly developed in the United States.

Whenever Toni Morrison has a new novel, her readings fill halls, and lines for her signings are often hours long. Fans of her other dark, often heart-breaking books about the black experience in America, can't wait for more.

"Love" went on the bestseller list as soon as it was published. It explores the losses that went with the gains brought about by the Civil Rights era, the disintegration of the world Bill Cosey and his resort represented.

"Those places, by and large, collapsed for political reasons and economic reasons and mostly because African Americans didn't have to go there anymore," explains Morrison. "They weren't limited, so I wanted to have that as the background, and then show the people in that family and how that movement of pre- during, and post-Civil Rights affected them in their personal relationships with each other."

Growing up in Lorain, Ohio, not far from Cleveland, Toni Morrison never
experienced anything like what happened to the characters in her book.

She was born Chloe Wofford; "Toni" came from her middle name, Anthony, and "Morrison" from her ex-husband. Until she went away to college at Howard University, she had always lived surrounded by whites.

"Most of my writing about the black public, the black family, the black
community is part of my life, but a lot of it was inquiry," says Morrison. "I never lived in a black neighborhood."

In 1988, Toni Morrison won the Pulitzer Prize for "Beloved." In 1993, she was awarded the Nobel Prize for literature, the first African American woman ever to win it.

As part of her Nobel acceptance speech, she said, "Language as power,
language alone protects us from the scariness of things with no names."

On the wall of her office at Princeton University, where she is a professor, her enormous leap looks like a short, straight line -- a natural progression from one to the other, when in fact she's sacrificed a great deal for what she's loved the most.

"I said, 'Okay, what is it I have to do that's so important that I'll die if I don't?'" she says. "There were two things, and the first one was mother my children. And the second one was write."

Morrison was a single mother trying to raise two sons as she worked fulltime as a book editor, and struggling to write.

Her younger son, Slade, was four when she published her first novel, "The Bluest Eye." It wasn't until her third book, "Song of Solomon," that she dared to call herself a writer on her income tax forms.

"I didn't get to see much of her, so there was a little tension at times," says Slade Morrison.

Slade Morrison is now a painter, whose studio overlooking the Hudson River is a mile down the road from his mother's house.

"When she did 'Song of Solomon,' and she finished, she said, 'I'm sorry. This whole summer, the whole time, I did not spend one minute with you.' She's crying. I said, 'Why are you crying?' I didn't even notice that. I wasn't thinking that way."

Toni Morrison admits she never read to her children when they were little, although it's obvious she's good at it.

At 72, she reads the part of Slick Snake for Slade, who is 38. The snake is from the Aesop's fable about the good Samaritan, who gets bitten for his trouble. The re-telling is part of a series of children's books the mother and son have been working on together.

The Aesop's tales are being illustrated by Belgian artist, Pascal le Maitre.

In the Morrisons' version of the tales, the characters are hipper and the morals are unrecognizable.

Toni Morrison is used to shutting herself in a room alone. Immersing
herself in the rigors of writing and working with Slade is a marked
departure.

Mothering her children and writing may have been the two things Toni
Morrison decided she had to do or she'd die, but eventually it occurred to her she could do both at the same time.

"It's an odd situation to now, with an adult Slade, work on this with him," says Toni Morison. "Maybe it is a making up. Each generation has a kind of love. Some of it's really tough. What my grandmother thought was love of her children was really staying alive for them. What my mother thought was love of her children was to get a better place, maybe get enough money to send you to college if you wanted to.

"What I thought was love of my children was giving them the maximum amount of freedom, setting an example of how you could make choices in your life."

The love of a mother for her children has found its way into much of Toni Morrison's work. She's recording "Paradise," published in 1999.

And in "Beloved," a mother loved her children so much she was willing to kill them rather than see them returned to slavery.

Toni Morrison always regarded love as the agonizing subtext of her books about the legacy of slavery in America. But with the word there, before her, every time she signs her name, she's realized it's much more.