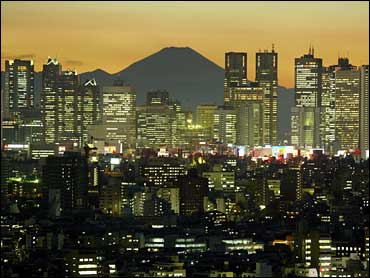 Paris, eat your heart out.

The creators of the famed Michelin Guides have bestowed a virtual galaxy of 191 stars to 150 restaurants in Tokyo - more stars than in any other city in the world, including Paris.

Eight restaurants in the Japanese capital, including two sushi eateries, received Michelin's highest three-star rating, according to the new Tokyo guide announced Monday, the first outside Europe and the United States. But Paris can still claim to have the most top-rated restaurants, with 10.

The 191 stars were the most awarded to any city. Paris previously had the most, with 65.

"Tokyo is a shining star in the world of cuisine," Michelin Guides Director Jean-Luc Naret said at a news conference. He declared Tokyo "the world leader in gourmet dining."

Clutching his Michelin plaque as he mixed with other chefs at a cocktail party later Monday, Ono said he was stunned by his three-star rating.

"I never dreamed this would happen. I've just always tried to make good sushi using the freshest fish," Ono said. "But with global warming, our catch is going down. From now on, I will make the best of what resources we have left."

A team of three undercover European and two Japanese inspectors spent a year and a half visiting 1,500 of Tokyo's estimated 160,000 restaurants to decide on the ratings, according to Michelin. The famed guidebook series rates establishments on excellence in cooking, service, decor and upkeep.

There were so many good restaurants that all entries in Michelin's Tokyo edition have at least one star, a first for any city, Naret said. Five of the eight awarded top honors served Japanese cuisine, while three served French.

In another first, two restaurants received top ratings despite getting rapped for their service, which the guidebook rates separately.

Sukiyabashi Jiro and Sushi Mizutani were awarded three stars even though their "Category of Comfort" rating was just 1 out of a scale of 5. Even the top sushi chefs here tend to serve their fare in small, starkly decorated eateries with minimal table service.

"That doesn't mean the cuisine is anything less than first rate," said Taku Suzuki, spokesman for Michelin in Japan.

The entries in Michelin's Tokyo edition appeared to have eased local skepticism that the French can be the best judge of Japan's culinary traditions.

"The French do not understand anything about sushi ... how can they judge us?" Yoshikazu Ono had told The Associated Press in March when the Tokyo guide was announced. Ono, a chef at Sukiyabashi Jiro and son of Jiro Ono, beamed at his father's side at Monday's party.

Toru Okuda, who won three stars for his modern Japanese restaurant, Koju, said it was about time the world recognized Tokyo's culinary brilliance.

"Tokyo is delicious, whatever you eat, wherever you eat," Okuda said. "I wonder why Michelin didn't come here earlier," he said.

The first Michelin guide was published in 1900 as a handbook for French motorists. Guides to 23 countries are published by the Clermont-Ferrand-based tire company of the same name.

Michelin will announce a guide to a second Asian city next year, according to Naret.