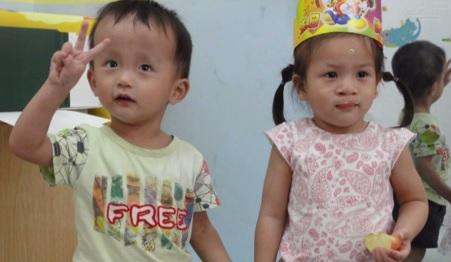 PLANO, Texas – A 17-second video clip captures the sheer joy shared by two best friends as they were reunited at Dallas-Fort Worth International Airport.

Three-year-old Dawson and four-year-old Hannah were seeing each other for the first time in 11 months, CBS Dallas-Fort Worth reported.

“They must have hugged 400 times. They kept hugging and getting so giddy that they would fall over,” said Dawson’s mom Amy Clary.

“That went on for like 20 minutes,” added Sharon Sykes, who is Hannah’s mother.

Before they were a part of their North Texas families, Hannah and Dawson had each other. They had been inseparable at the orphanage in China where they had essentially spent their entire lives.

“They had so little connection, and so little consistency, [but] they had each other for those first formative years,” explained Sykes.

Both parents said the children fortunately shared the same “weekend momma,” or foster mother, who would spend time with them on weekends. Both had been at the orphanage since they were just months old.

“They call each other brother and sister,” said Sykes.

Hannah and Dawson’s close relationship became apparent to Sykes as she and her husband were going through the adoption process.

In nearly every photo update the family received from their adoption agency, their daughter Hannah was next to her best friend. The two were always playing together and always holding hands.

Bringing Hannah home to North Texas meant leaving Dawson behind. Sykes was determined to find him a loving home, so she shared his story on Facebook.

“He was on my heart. Really, I couldn’t stop thinking of him,” said Sykes.

Through a mutual friend, Amy learned about the Facebook post. Her family happened to be having dinner at a Chik-fil-A. Her husband Christopher joked that the decision was made by the time he came back into the restaurant from the play area.

“I was gone for 45 seconds, maybe it was two minutes, and then [she] said, “We’re adopting this little boy. I just said okay,” said Christopher

The Clary’s already had a full house. They have three kids under five-years-old, but they also had an open heart.

They had been foster parents in the past, and Amy said her faith had been calling on her to help.

Nearly a year later, Dawson and Hannah were picking up where they left off. This time, they’re neighbors. The families live about five minutes away from each other.

Through their children, and through adoption, two families had become one.

“You think you’re doing something for them, and our lives have been so blessed,” added Sharon Sykes.

Couple new to U.S. gets hundreds of invites to Thanksgiving
More