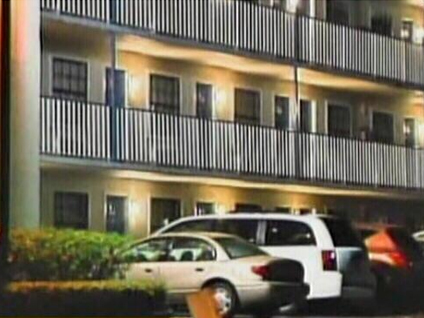 ORLANDO, Fla. - A concerned citizen who spotted a toddler clinging to a fourth-floor balcony of an Orlando-area hotel managed to catch the child, who was not injured.

Orange County Sheriff's spokeswoman Denise Rollins said "it was a miracle" the 2-year-old girl, Jah-Nea Myles, wasn't injured in the fall, which happened about 9:15 p.m. at the Econo Lodge on International Drive in Orlando, reports CBS affiliate WKMG.

Helen Beard, a tourist from England, was at the pool and saw the child hanging from the the fourth-floor railing and caught her as she fell, deputies told WKMG. Beard said it appeared that the girl slipped through a railing lining the walkway of the balcony, according to deputies.

Jah-Nea struck the third-floor railing as she fell, but she had no scratches, bruises or injuries, deputies said. She was playful and did not have any marks or appear to be in any discomfort after being taken to Arnold Palmer Hospital as a precaution, deputies said.

Helena Myles, the mother Jah-Nea, told deputies that she left her daughter with a friend in the room next door, according to the Orange County Sheriff's Office. Myles, who lives in the Tampa area, said she heard screaming, and her friend told her that Jah-Nea fell from the fourth floor, where they were staying, deputies stated.

The friend, Dominique Holt, said he went to use the bathroom and found the hotel room door open after hearing screams, the Sheriff's Office stated. Holt, who said the hotel room door may have been left cracked open, then saw Beard standing on the ground holding Jah-Nea, according to deputies.

Another woman was also in the hotel room with Holt, but said she didn't know Jah-Nea was there, according to deputies.

Another guest said although she didn't see the toddler fall, she heard horrific screams from those who witnessed the incident.

The child was taken to a hospital for observation.

The Florida Department of Children and Families will investigate because the child was unattended.

No criminal charges were pending as of Thursday morning., WKMG reports.