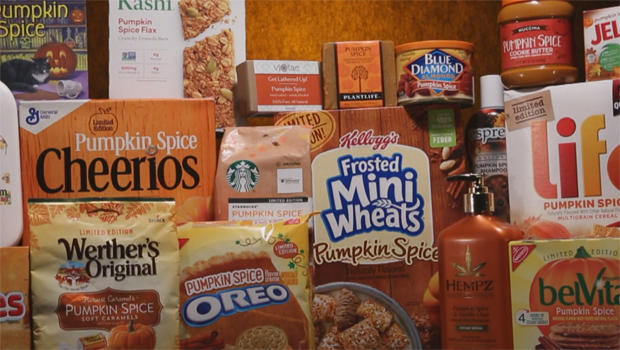 Nowadays everything, it seems, is flavored like pumpkin pie, from lattes and martinis to pet shampoo. Susan Spencer looks into the spice of life:

The ominous warning signs are there: Pumpkin Spice is taking over the world.

"Certainly the pumpkin spice latte was the one product that really expanded into other foods," said Jill Pratt.

It feels like it's almost illegal not to have a food that is flavored with pumpkin spice!

Over the past year, Americans spent more than $400 million on pumpkin spice stuff.

"Well, pumpkin pie spice is one of those symbolic fall flavors," said Pratt, a bona fide pumpkin spice expert; she works as VP of marketing at McCormick, the spice company, in Hunt Valley, Md.

If there's a Pumpkin Spice Central Command, this is it. More accurately, McCormick calls it Pumpkin PIE Spice.

Pratt's dress, by the way, is the color of pumpkin pie. "It might have occurred to me this morning," she said.

"If you really want your dog to smell like a pie, you can do this?"

And what about Pumpkin Pie Spice Deodorant? "I've not experienced that product," Pratt said.

And what about body lotion? "Well, that I can see!"

How quaint that seems … once you've tasted a Pumpkin Spice Martini.

"I could have seven or eight more of them," laughed Spencer.

Needless to say, McCormick loves the idea that anything tasty is tasti-er with a bit of pumpkin pie spice.

See for yourself with these recipes:

And can Jill Pratt think of any use that she would absolutely reject it for? "Pumpkin pie spice asparagus," she replied.