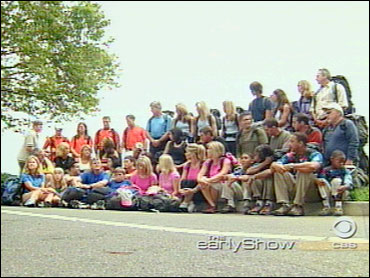 I've got nothing against the David Letterman show. It's a very funny show. In fact, if Dave ever asks me to be a guest, I will probably clear my calendar to accommodate him. However, when John McCain went on Letterman last week to "unofficially" announce his candidacy for the presidency of the United States, don't you think it was a tad bit undignified? I mean, he made this announcement about the most important job in the world on a comedy-talk show that is best known for its "Top 10 List" and "Stupid Pet Tricks."

Previously, some candidates made their announcements on the Larry King show. Larry would interview the candidate, who would talk about why he was the best person to help save the planet, and then Larry's next guest would be somebody like the world record holder for whistling while eating crackers.

Memo to prospective candidates who want to be taken seriously: Instead of announcing your intention to run for president on a commercial TV show, just hold a press conference.

I don't expect any candidate to take my suggestion. That's because they don't really care about dignity. They care about being seen on television by as many people as possible and/or by the demographic groups that their advisers want them to woo.

Television has become increasingly important in terms of how we elect our leaders. Many people don't vote for the person they think would be the best president, but for the person they think looks best on television. To them, Nixon lost because he sweated too much and needed a shave, Reagan was great on TV, Al Gore was too stiff on television, and John Kerry came off as a Frenchman. So is it any surprise that nothing seems more important to candidates than television time?

But I think things have gone too far, which probably means they will go even further. I believe that soon some candidates won't just make their announcements on semi-news or talk shows. If they really want to be seen by the most people, what's to stop them from appearing on regular entertainment shows?

I don't think we're that far away from watching a scene on "CSI" in which a coroner examining a corpse will suddenly turn to the camera, remove his mask, and say, "I'm not really an actor. I'm actually running for president."

Perhaps it's more likely that they will go on "reality" or game shows to do their announcing. The names of some shows would lend themselves perfectly to political appearances. "The Amazing Race" would be a natural for them. Hillary Clinton and Rudy Giuliani might want to show up on "Family Feud." And those who are doing worse in the polls than "others" can be on "The Biggest Loser."

The next step in this evolution is not just that candidates will appear on these shows to make their announcements. Next they could start participating in them. Every four years, a different "reality/game show" could host the presidential candidates. If it's "American Idol," all the candidates will sing, and the country can call in their votes for their favorite singer/candidate. The winner becomes president. We wouldn't even have to walk down the block to our polling place.

Come on. Who wouldn't want to see the current crop of candidates competing in "Dancing With The Stars?" And wouldn't you want to watch them eating bugs and crawling through the mud on "Survivor: The Presidential Election?"

Maybe I'm overreacting. Perhaps the stakes are so high that the candidates can't be blamed for wanting to be seen by large television audiences. And maybe they do have more restraint and class than I'm giving them credit for. After all, nobody announced their candidacy during the Anna Nicole Smith legal proceedings — so far.