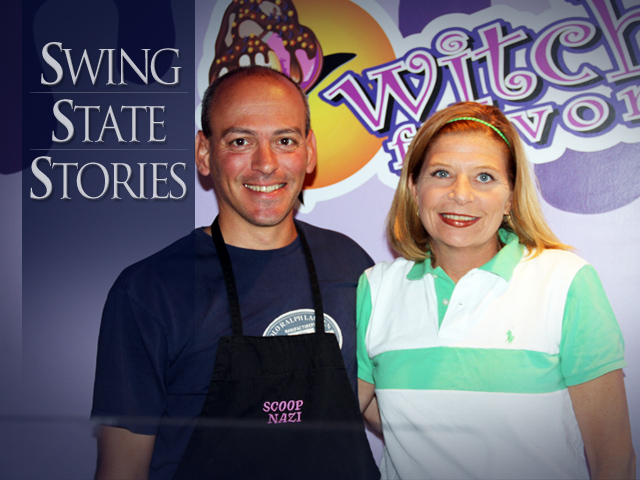 (CBS News) BEAVER, Pennsylvania - Ice cream shop owner Lisa Ragazzini got a taste of the "magic" emanating from President Obama when he stopped by a bakery in this small town north of Pittsburgh earlier this month.

"He's so charismatic and everything, so I can see how people get caught up in that," said Ragazzini, who left her white-collar job to co-found "Witch Flavor?" with partner John Biondi last year.

But charisma, she says, isn't enough.

"We want to grow our business and eventually become a big corporation, but I just don't see how it's going to happen with insuring our children until they're 35," she said, a reference to the mandate in the health care law allowing children to stay on their parents' insurance policy until age 26. "Whatever happened to when you're 18 you're out? Come on, kids. We raised you, we put you in college, sink or swim on your own. I'm just tired of band aids, band aids, band aids."

Biondi added that while he isn't "overly impressed with Mitt Romney," the presumptive Republican nominee is better than the incumbent.

President Obama won Pennsylvania by more than 620,000 votes in the 2008 election, largely on the strength of his performance in and around Philadelphia: He won Philadelphia County by nearly 480,000 votes and the surrounding swing areas by roughly another 200,000 votes. His performance in the region, which holds about 40 percent of the state population, made what happened in the rest of the state close to irrelevant.

Yet after nearly four years in office, there are big questions over whether Mr. Obama can even come close to repeating that performance. It appears unlikely that African-Americans and young voters, who powered Mr. Obama's big margins in 2008, will come out in the same numbers that they did last time around; a Pew Research Center last month found that, nationally, 60 percent of younger voters are giving a lot of thought to the election, a drop from 71 percent in 2008. A drop in voter enthusiasm in places like Philadelphia County - which is 44 percent African-American - puts the state's 20 electoral votes very much in play.

"He's not going to do that well this year," Jon Delano, the Money & Politics Editor at CBS affiliate KDKA-TV in Pittsburgh, said in reference to Mr. Obama's 2008 performance in Philadelphia. Delano said that the decisive factor in who wins the state, in addition to turnout in and around Philadelphia, will be how Mr. Obama performs in areas around Pittsburgh - places like Beaver County, which Mr. Obama lost in 2008.

Mr. Obama wasn't supposed to lose Beaver and the counties around it, steel-industry strongholds full of working-class, unionized white voters who have long leaned Democratic. Yet he alienated many in the 2008 cycle when it was revealed he had claimed that working-class voters in Pennsylvania "cling to guns or religion" as a result of economic hardship. The comment prompted one man at an Obama rally in Beaver to show up with a fully-loaded gun prominently displayed in a holster.

"The social values of Democrats in western Pennsylvania tend to be different than the social values back east," said Delano. "They tend to be conservative. We like our guns very much - we love our guns. We grew up hunting. Some tend to be Bible thumpers. And candidate Obama was dissing people for their religion and their guns."

While Beaver County tends to be socially conservative, according to Air Force pilot and Beaver resident Andy Thompson, "Folks here tend to be fiscally less conservative." That creates an opening for Mr. Obama at a time when the national focus is squarely on the economy.

Romney "doesn't really care about middle-class people, he doesn't care about working people. He has his money already," said William Lasenburg, an unemployed salesman in Pittsburgh who is strongly backing the president.

Terri Bostard, who works in accounting and lives in the Pittsburgh suburb of Forest Hills, said she remains undecided between the two candidates.

"I don't think that Romney is necessarily in touch with the middle class, but on the other hand when you look at what's occurred in the past four years, I don't really think we've seen any progress either," said Bostard. "I don't necessarily think it's Obama's fault, but I don't think the nation as a whole has made any progress."

Romney will campaign in Pittsburgh on Tuesday and in Toledo, Ohio, on Wednesday in an effort to attract voters like Bostard with a message of economic competence. Swing voters around Pittsburgh and Pennsylvania are at least somewhat open to that message, according to Christopher Borick, a political scientist at Muhlenberg College.

"They're probably going to give Romney a decent look," he said. "They're not anti-Obama but they're not sold on him. So they're in play."

"At the end of the day, there are still question marks about the president," Borick added. "They could still vote for him again. But if there's a lot of questions and nagging doubts about economic direction and security, they might opt out."

The Obama campaign, meanwhile, is seeking to align the president with working class voters while defining Romney as too out of touch to understand their economic struggles.

"I think the strategy is that they're trying to identify with middle class people," said Delano. "And to separate Mitt Romney as some ultra-wealthy society boy who's never known what it's like to work for a living, and keeps his money overseas, and has multiple cars and vacation homes."

Pennsylvania has both one of the oldest populations and the highest percentage of college students in the nation, and both groups are expected to be disproportionately affected by a new state law pushed through by Republicans mandating that voters present valid photo identification at the polls. Republicans say the measure was needed to prevent voter fraud despite a lack of evidence that significant voter fraud has taken place in the past; Democrats say the law is designed to suppress Democratic turnout. Last month, Mike Turzai, the Republican majority leader in the Pennsylvania statehouse, said flatly that the law "is gonna allow Governor Romney to win the state of Pennsylvania."

More than 9.2 percent of Pennsylvania voters - in excess of 758,000 - lack state photo identification cards, the Philadelphia Inquirer reported. Some will be able to present alternate forms of identification, such as student identification cards that include expiration dates. Statistician Nate Silver of the New York Times estimates that the law will "reduce turnout by about 2.4 percent as a share of registered voters," resulting in a reduction in "President Obama's margin against Mitt Romney by a net of 1.2 percentage points."

Yet Mr. Obama remains the favorite in the state: Polls show him with a roughly 8 percentage point lead over Romney. That's due in part to the fact that Democrats have a voter registration advantage in excess of one million voters. Democrats say that they will also benefit from a superior get-out-the-vote operation in the state and anger among suburban women over Republican positions on women's health issues.

Republicans, meanwhile, are pouring money into Pennsylvania in hopes of ending their streak of five straight presidential losses. They say Romney's moderate image and focus on economic issues makes him a strong candidate to peel off some of the independent-minded suburban voters who backed Mr. Obama in 2008, and are buoyed by the fact that their party took control of the state legislature and the governorship two years ago. While Pennsylvania's 7.4 percent unemployment rate is below the national average, polls show Mr. Obama's job approval rating in the state is below 50 percent, with voters effectively split on whether he deserves reelection.

For Republicans, winning Pennsylvania means converting voters like Chris Johnson, owner of the Pittsburgh Pasty Factory. On a sweltering July day, the Moon Township resident stood behind a booth in Pittsburgh's Market Square hawking pasties - meat and vegetarian pies - to professionals on their lunch break.

"I created my product for the idea that we're in a recession, and people aren't going to have money to eat out," he said. Johnson campaigned for Mr. Obama in 2008 - knocking on doors to generate support - but he doesn't plan to do so this year.

Despite his lack of enthusiasm for the president, however, Johnson still plans to back him in November.

"Given the choice of Obama or Romney, I'm definitely going to vote Obama," he said. "If nothing else because he's far more personable."

This is the latest in a series on CBSNews.com examining the key factors and the people in the swing states that will decide the presidency.