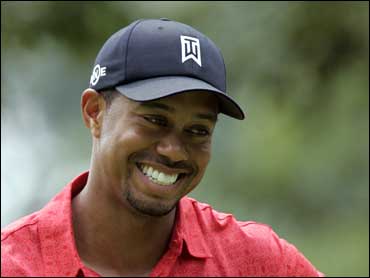 The red shirt was familiar, and so was the result.

Tiger Woods won his 50th PGA Tour title Sunday, shooting his fourth-straight 6-under 66 for a three-stroke victory over Jim Furyk in the Buick Open.

Woods reached a season-low 24 under Sunday and made a career-high 28 birdies in the tournament, holding off Furyk — who closed with a 64 — for his fourth win of the year and a check of $864,000.

Woods became the seventh member of the PGA Tour's 50-win club after improving to 21-for-21 when leading by more than one stroke after three rounds. The 30-year-old Woods beat Jack Nicklaus' record pace to the milestone, which Nicklaus reached in 1973 at the age of 33.

Woods, coming off his emotional victory in the British Open, will get a chance to win his 12th major in two weeks at the PGA Championship in suburban Chicago, where the superstar hopes to close in on the record he covets: Nicklaus' 18 major championships.

Woods has won nearly a fourth of 210 PGA Tour events he has entered since turning pro in 1996. This year, his four victories have come in 11 events.

At Warwick Hills, Woods likely ended any hopes his competitors had when he made four birdies on the front nine to build on the two-shot lead he had at the start of the fourth round.

Woods bogeyed the 12th hole, allowing Furyk to tie him briefly, but took the lead alone for good at 13 when his approach from 105 yards landed close enough for a tap-in birdie. At 15, Woods' birdie gave him a two-shot lead and essentially clinched his second Buick Open victory.

After making a 7-foot par putt at 17, Woods took a two-shot lead into the final hole and was able to enjoy his latest victory stroll up the fairway where an overflow crowd cheered louder each step that he got closer to the green. Fittingly, he made a birdie at 18.

Joe Durant (67) finished four shots back, alone in third. Vaughn Taylor (68) and Scott Verplank (69) tied for fourth at 19 under with Sean O'Hair (67) to improve their chances of earning spots on the U.S. Ryder Cup team.

Vijay Singh had a chance to become the first player to win three straight Buick Opens — and four overall — when he started the day three shots back. But Singh closed with a 70 to tie for 11th at 17 under.