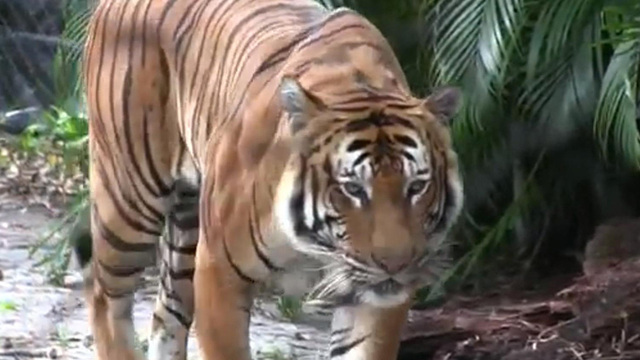 MIAMI- The South Florida zoo wherea veteran keeper was attacked and killed by a Malayan tiger is reopening Monday as authorities from several local, state and federal agencies continue investigating what led to Friday's deadly attack.

Speaking in front of the Palm Beach Zoo and Conservation Society, Naki Carter, a zoo spokeswoman, told reporters late Sunday that they will open its doors to the public, beginning at 9 a.m., and that a fund has been created to support tiger conservation in honor of Stacey Konwiser.

Zoo officials also announced that the tiger will not be removed from the zoo.

Konwiser was killed Friday by a 13-year-old male tiger in an enclosure known as the night house, where tigers sleep and are fed. The tiger was tranquilized and has since recovered, and remains at the zoo. The zoo was closed over the weekend.

Konwiser, the zoo's lead keeper, had worked at the zoo for three years and had "extensive experience" in managing large cats, said Carter. "She loved big cats," she said.

Konwiser's husband, Jeremy, who worked at the same zoo as a keeper, said in a statement that "human beings and animals lost a wonderful friend."

Carter declined to comment on the investigation, but said she wanted to "dispel misinformation" that the tiger had been mistreated. She also said that zoo officials did not fault the animal for the attack.

"The tiger is healthy," she said. "There has never been blame assigned to the wild Malayan tiger involved in this deadly incident."

The tiger is one of less than 250 such tigers known to exist in the world. The zoo has four similar tigers, three males and one female, and serves as a "breeding ground to make sure they don't become extinct."

Carter declined to say whether the public would be able to see the tigers on exhibit Monday and would not identify the nickname of the tiger that attacked Konwiser.

She said zoo officials are cooperating with several agencies investigating the attack, including the West Palm Beach police, Florida Fish and Wildlife officials and the federal Occupational Safety and Health Administration.

Carter said Konwiser was "like a sister to many" and that she will be long remembered for her dedication to the zoo's animals.

"Will it be business as usual for us? No it will not," she said. "We've lost a member of our family."