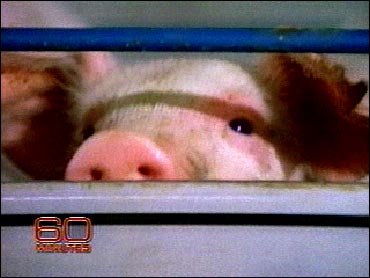 A woman who offered to use her 5-month-old pig as bait to lure a tiger that escaped from the home of an actor who once played Tarzan will be cited for animal cruelty, officials said.

Linda Meredith, of Loxahatchee, put the pig in the trunk of her car and drove to the neighborhood where officials were searching for the tiger shortly after she heard of its escape.

Meredith asked officers to grab the hind legs of the pig, named Baby, or twist its ears so it would squeal and attract the tiger. The officers declined her offer.

Palm Beach County Animal Care and Control Director Dianne Sauve said Meredith will be cited for transporting the pig in her trunk.

"I was appalled," Sauve said. "Carrying an animal in a trunk in 90-degree heat, where it's probably 140 degrees inside, is not acceptable."

Meredith said the trunk of her Cadillac is air conditioned, and she was planning to eat the pig when it is full grown.

"I can't believe they have the gall," she said. "I was just trying to help the tiger find his way back home."

Following a 26-hour search, the tiger, which belonged to actor Steve Sipek, was shot and killed Tuesday after allegedly lunging at a wildlife officer.

"My beautiful Bobo, that I loved all my life, gone. Gone, because heartless people would not give him a chance, would not give me a chance to walk him home or take him out of the area," said Sipek on CBS News' The Early Show Wednesday morning.

The tiger's escape and the shooting were under investigation, officials said.

Sipek says this was a set-up.

"Bobo did not escape. I have 12-foot walls around my property, like China walls. He could not climb 12-foot walls," he told Early Show co-anchor Harry Smith. "There were four gates between my house and the outside world. Somebody opened all of them — somebody who knew how to handle situation and cause problems."