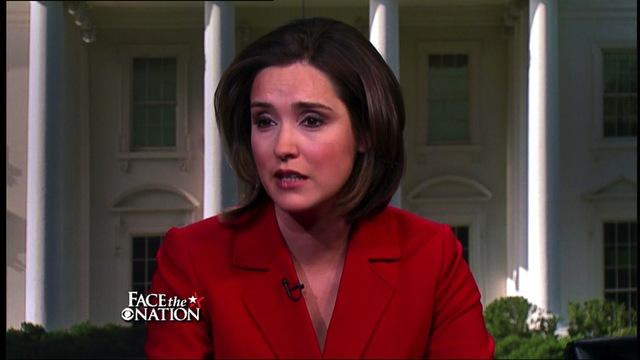 CBS News' Margaret Brennan was named moderator of Face the Nation on Thursday, but she's no stranger to the broadcast. Since joining CBS News in 2012, Brennan has appeared dozens of times on the show, from Washington, D.C. and all over the world, bringing her reporting on politics and global affairs to viewers.

Her very first appearance on Face the Nation came on November 18, 2012, in the midst of a heated national debate over the terrorist attack in Benghazi, Libya that claimed four American lives, including then-U.S. Ambassador to Libya Chris Stevens.

Brennan, then CBS News State Department correspondent, participated in a roundtable discussion with the Washington Post's David Ignatius, journalist and author Tom Ricks, and CBS News correspondent Bob Orr. She was asked by moderator Bob Schieffer how the State Department was reacting to the investigation into what happened in Benghazi. At the time, Republicans were criticizing the Obama administration's security posture in the region, its response to the attack and the explanation it provided to the public.

"This is one of the most sensitive topics, people feel very personal and take this in a very personal way, this attack," Brennan explained. "But then you also get Foreign Service officers on the sidelines who will say to you, 'We are very concerned about security. We are very concerned about other soft targets out there.' The Department of Defense and the State Department are reviewing other compounds right now to see if other Benghazis could exist. There's a real question about the relationship between the CIA and the State Department, how they coexist in some of these locations and support each other."

Brennan was also asked why Stevens was in Benghazi during the incident, which happened on the 11th anniversary of the 9/11 terrorist attacks.

"He was supposed to be there to open a cultural center there in Benghazi that's why he was officially there," she explained. "We may not get some of the answers to these questions until Secretary Clinton goes to the Hill with the probe that the State Department did in her hand. Sources tell us that probably won't be until the end of December. A lot of that information is going to be about the questions that the State Department has asked themselves. It won't necessarily get us inside the White House. It won't necessarily get us inside the CIA and some of their decision making, but it will lay out what happened, when the requests were made for security, and why, perhaps, they weren't fulfilled in the way that some have said in hindsight they should have been."

For more of Margaret's first appearance on Face the Nation, watch the video above. And make sure you tune in this Sunday to see her first broadcast as the permanent moderator. Check your local listings for airtimes.