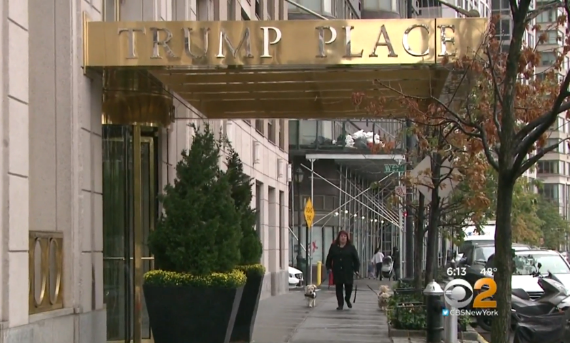 “The purpose of this change is to assume a neutral building identity that appeals to all current and future residents,” building management said in a letter to residents. “Using the street address for the building name is popular practice in NYC, and our well-known Riverside address makes it easy for visitors to locate the building.”

Some residents at Trump Place signed a petition last month for the name removal.

“It’s been an embarrassment to live in a building with Trump’s name. I wasn’t happy about it when I moved in, but he wasn’t running for president,” a woman named Ilene told CBS New York.

“He’s disgusting, and you know it’s embarrassing to tell people you live in a Trump building,” Marjorie Jacobs said.

Jacobs told CBS New York she moved in five years ago after she lost her home in Superstorm Sandy.

“The dogs are very comfortable and it’s a pet friendly area. The building is truly beautiful,” she said.

Jacobs said the stigma of living in Trump Place tarnishes its gilded exterior.

However, some residents didn’t want the name taken off, but also didn’t want to go on camera, CBS New York reported.

In October, Equity Residential, which owns Trump Place, said it has a contractual obligation to keep the Trump name.

“We will assess the continued use of the name at the appropriate time taking into consideration the issues raised by the residents,” they said at the time.

Twelve buildings in New York City currently bear the Trump name, he owns three of them, but not the ones at Trump Place -- they are Trump in name only.