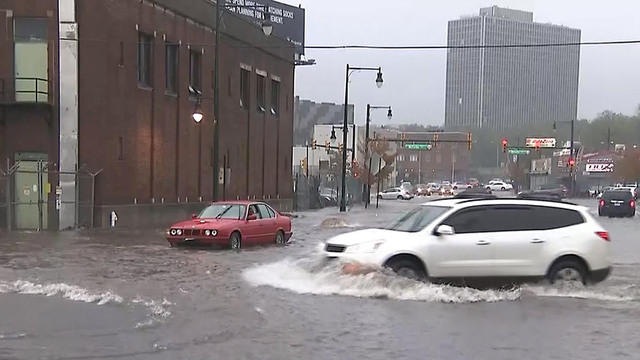 Some utilities warned customers that power could be out for a few days.

Torrential rain was brought on by a cold front from the west and tropical moisture from the remnants of Tropical Storm Philippe.

National Weather Service meteorologist Joe Dellicarpini said there were reports of downed trees and power lines around the region and roads that were impassable in spots due to flash flooding.

The New England area appeared to get the brunt of the storm, which brought sustained winds of up to 50 mph in some spots, with a gust of 82 mph reported in Mashpee on Cape Cod in Massachusetts.

Maine and New Hampshire also got pounded. The Portland International Jetport in Maine recorded a wind gust of 69 mph, and the Amtrak Downeaster service canceled a morning run due to down trees on the tracks.

In Maine, about 240,000 power outages were reported and downed trees closed a number of streets. More than 200,000 customers were without electricity in New Hampshire, where hundreds of school districts canceled classes Monday and others delayed openings.

"We need about 24 to 48 hours to really get a good handle on what the scope of the damage is," Seth Wheeler, a spokesman for New Hampshire Electric Cooperative, told reporters. "We'll be making restorations along the way, but this is going to be a multiple-day event."

He added, "I think if you're without power at this time, you should expect to remain without power, possibly for a number of days."

The Meriden Humane Society in Connecticut put out a call for volunteers on its Facebook page Sunday night to help deal with flooding in its dog kennels. A couple of hours later, the humane society thanked the volunteers who turned out to help dig a "major trench" to drain water away from the building.

"We are beyond humbled at the outpouring of support from our community," the human society wrote on its Facebook page. "Thanks to all of you, our dogs will be sleeping very comfortably and most importantly, very dry!"

The same storm system also caused problems earlier Sunday in Pennsylvania, New Jersey and New York. About 44,000 total were without power in Pennsylvania and New Jersey, where the worst of the storm had moved out by 8 a.m. In New York, the rush hour got off to a rocky start as service on Metro-North's Danbury Branch was suspended due to a mudslide and signal power problems. Part of the Long Island Rail Road's Ronkonkoma Branch was halted because of power lines on the tracks. Video posted on Twitter showed unhappy commuters crowding a station.

The storm began making its way up the East Coast on Sunday, which also was the fifth anniversary of Superstorm Sandy. That 2012 storm devastated the nation's most populous areas, was blamed for at least 182 deaths in the U.S. and Caribbean and more than $71 billion in damage in this country alone.