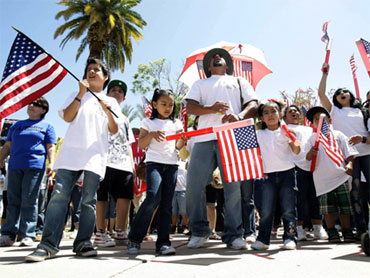 Civil rights activists called on President Barack Obama to fight a tough new Arizona law targeting illegal immigrants Sunday, promising to march in the streets and invite arrest by refusing to comply if the measure goes into effect.

U.S. Rep. Raul Grijalva of Arizona told about 3,500 protesters gathered at the state Capitol that the Obama administration can help defeat the law by refusing to cooperate when illegal immigrants are picked up by local police and turned over to federal immigration officers.

Obama has called the new law "misguided" and instructed the Justice Department to examine it to see if it's legal. It requires police to question people about their immigration status - including asking for identification - if they suspect someone is in the country illegally. Opponents say it would undoubtedly lead to racial profiling, because officers would be more likely to ask people who look Hispanic.

Discomfort over the law was also expressed as well at some Sunday religious services.

"I'm not in the place to where I would root out those who are in the country without documentation and hand that over to the authorities," said Rev. John Flowers, co-pastor of First United Methodist Church.

A controversial sheriff well known for his tough policies says the new law is exactly what's needed, and he is prepared to act, reports CBS News correspondent John Blackstone.

Maricopa County Sheriff Joe Arpaio says his department has arrested some 38,000 illegal immigrants in the past three years and the new law will give him the tools to step up his efforts to combat the flood coming across Arizona's border with Mexico.

"I will arrest the people that are here under that new misdemeanor law and book them into our jails," Arpaio said.

But Phoenix Mayor Phil Gordon says many supporters of the law are not just misguided, they are racist.

"It's just morally wrong," he told Blackstone. "This country is not about having people wear arm bands with Jewish stars or in this case Hispanic brown symbols," Gordon said. He also called the law "clearly unconstitutional."

Supporters have dismissed concerns of racial profiling, saying the law prohibits the use of race or nationality as the sole basis for an immigration check. Gov. Jan Brewer, who signed the bill into law Friday, has ordered state officials to develop a training course for officers to learn what constitutes reasonable suspicion someone is in the U.S. illegally.

Current law in Arizona and most states doesn't require police to ask about the immigration status of those they encounter, and many police departments prohibit officers from inquiring out of fear immigrants won't cooperate in other investigations.

The new law makes it a crime under state law to be in the country illegally. Immigrants unable to produce documents showing they are allowed to be in the U.S. could be arrested, jailed for up to six months and fined $2,500. It also allows lawsuits against government agencies that hinder enforcement of immigration laws.

Arizona officers would arrest people found to be undocumented and turn them over to federal immigration officers. Opponents said the federal government can block the law by refusing to accept them.

The Rev. Al Sharpton, speaking Sunday in New York, said that just as freedom riders battled segregation in the 1960s, he would organize "freedom walkers" to challenge the Arizona law.

"We will go to Arizona when this bill goes into effect and walk the streets with people who refuse to give identification and force arrest," Sharpton said.

Mexican President Felipe Calderon's office said in a statement Saturday that "the Mexican government condemns the approval of the law" and "the criminalization of migration, far from contributing to collaboration and cooperation between Mexico and the state of Arizona, represents an obstacle to solving the shared problems of the border region."

Arizona has an estimated 460,000 illegal immigrants and is the state with the most illegal border crossings, with the harsh, remote desert serving as the gateway for thousands of Mexicans and Central Americans.