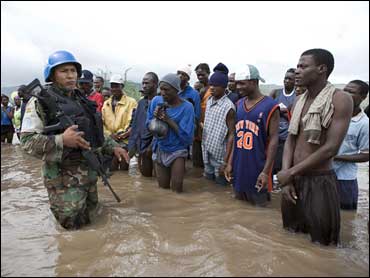 The convoy rumbled out of the U.N. base toward a flooded, starving and seething city Thursday, carrying some of the first food aid since Tropical Storm Hanna killed 137 Haitians and drowned Gonaives in muddy water three days ago.

Hungry children at three orphanages were waiting for the canvas-topped trucks, loaded with warm pots of rice and beans and towing giant tanks of drinking water.

The trucks didn't make it.

The convoy crept over mud-caked, semi-paved roads past closed stores, overturned buses and women wading in water up to their knees with plastic tubs on their heads.

After about 45 minutes, the half-dozen trucks ground to a halt. U.N. peacekeepers wearing camouflage fatigues and bulletproof vests jumped out while others stood guard with assault rifles.

Before them, a huge gouge marred the road. The floods had split the asphalt, and water ran through the 10-foot-wide gap.

The convoy turned around. And the children - like tens of thousands more in this increasingly desperate city - went another day without food.

At least 137 people died when Hanna struck Haiti, 102 of them in Ganaives and its surroundings, officials said Thursday. Some 250,000 people are affected in the Gonaives region, including 70,000 in 150 shelters across the city, according to an international official who spoke on condition of anonymity because he was not authorized to release the information. Argentine Lt. Sergio Hoj estimated that half of Gonaives' houses remained flooded Thursday.

Many houses were torn apart. Families huddled on rooftops, their possessions laid out to dry. Overturned cars were everywhere, and televisions floated in the brown water.

Gonaives - a collection of concrete buildings, run-down shacks and plazas with dilapidated fountains - lies in a flat river plain between the ocean and deforested mountains that run with mud even in light rains. Hanna swirled over Haiti for four days, dumping vast amounts of water, blowing down fruit trees and ruining stores of food as it swamped tin-roofed houses.

Hanna finally moved north Thursday with near hurricane-force winds on a path toward the southeastern U.S. coast. But in the chaos there was no way to know how many people might be dead, or how many had been driven from their homes. Two other storms killed 85 people in August, and forecasters warned that fearsome Hurricane Ike could hit Haiti next week.

Haiti's government has few resources to help. Rescue convoys have been blocked by floodwaters, although the U.N. World Food Program said Thursday it was sending a food-laden boat to Gonaives from the capital, Port-au-Prince, and would set up a base in the stricken city.

In the capital, U.S. Embassy spokeswoman Mari Tolliver said $250,000 in relief supplies arrived in Haiti Thursday, including jugs of drinking water, and would be sent to Gonaives by boat or plane.

"The idea is to get it there within the next day or two. Every effort is being made," she said, adding that another $100,000 will be used to buy bedding, kitchen items and other goods for victims.

"The situation in Gonaives is catastrophic," Daniel Rouzier, Haiti chairman of Food for the Poor, wrote in an e-mail. "We, just like the rest of the victims ... have limited mobility. You can't float a boat, drive a truck or fly anything to the victims."

Anger and frustration was growing at the inability or unwillingness of the government and the international community to help.

"If they don't have food, it can be dangerous," warned Sen. Youri Latortue, who flew in by helicopter. "They can't wait."

Dozens of people gathered around the gates of the U.N. base. Some children climbed cinderblock walls topped by barbed wire to ask soldiers inside for food. Edgy U.N. peacekeepers went on a heightened state of alert, and have traded their floppy hats for helmets.

Ad Melkert, associate administrator of the U.N. Development Program who just returned from Haiti, admonished international donors to do more.

"The poverty in the rain and mud of Haiti that I witnessed is nothing less than a disgrace," he said. "Many actors or potential actors try to play their part, ranging from the national government to multilateral and bilateral donors and NGOS. They all need to do more and better."

The few aid-group representatives in Gonaives did what they could - but knew it wasn't enough.

A local coordinator for the Florida-based Food for the Poor charity sailed through the flooded streets in a 22-foot fishing boat and picked up survivors, including two men struggling to keep afloat.

"The whole town is destroyed," Bernard Chauvet told The Associated Press over his cell phone as he headed for dry land, his boat jammed with 22 people including a pregnant woman and several crying children.

"These people lost everything," he said. "They have no water, no food. It is very bad."

Up to 400 people huddled in the Roman Catholic Church and the residence of Bishop Yves-Marie Pean, turning it into a de facto refugee camp. Many camped out on the watery grounds, while the lucky ones rested on chapel pews.

"We have shared with them what we had, but now we don't have food or drinking water," Pean said by telephone. "What is left is for the babies. We are praying together in solidarity in this very difficult moment."

Chantal Pierre, 19, somehow made it to the gates of the U.N. base, which is occupied by mostly Argentine troops. Soldiers carried her on a stretcher into a gym and laid her gently down. She went into labor amid the weightlifting equipment.

Minutes later, at a makeshift hospital on the base, she gave birth to a healthy girl.

A day earlier, Dorlean Nadege, 26, had given birth at the same place. Both babies slept in their mothers' arms Thursday. The doctor, Julio Cesar Lotero, said Pierre would leave on Friday, but Nadege would stay because her home was destroyed by floodwaters.