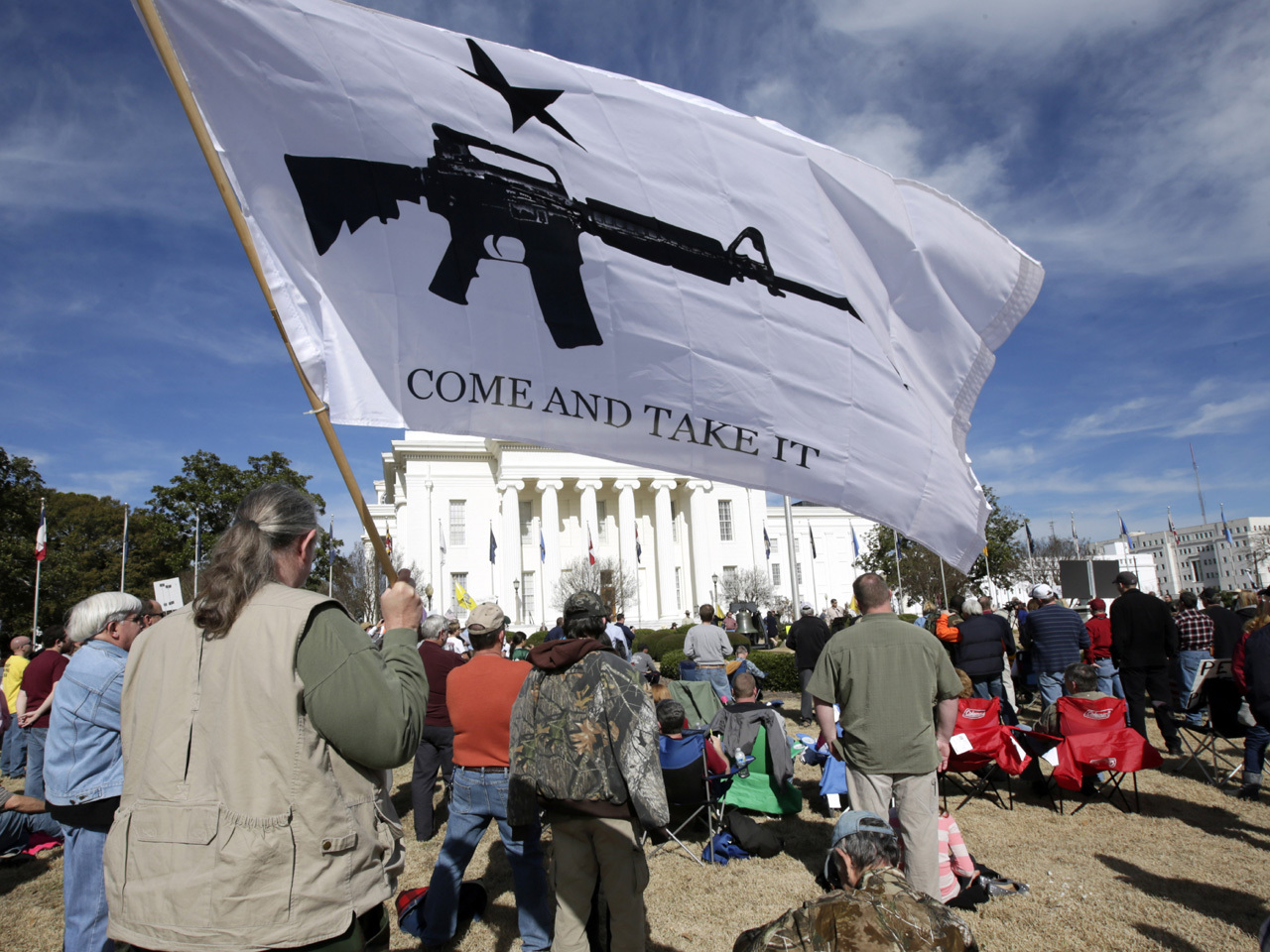 Thousands of gun advocates have gathered peacefully at state capitals across the U.S. to rally against stricter limits on firearms.

The size of crowds at each location varied - from dozens of people in South Dakota, to 2,000 in New York.

An estimated 600 people turned out so far for Saturday speeches in Austin, Texas. Many carried signs with messages such as, "An Armed Society is a Polite Society," and "The Second Amendment Comes from God."

Organized by the Washington D.C.-based group Political Media, the "Guns Across America" rallies have been promoted by activists via social media, and come days after President Barack Obama unveiled a sweeping package of gun-control proposals.

Larry Ward, president of Political Media, says the "Gun Appreciation Day" is modeled after last summer's "Chick-Fil-A Appreciation Day." That's when supporters of the fast food chain were asked to rally outside restaurants after the company came under fire for its stance on gay marriage.

Ward says the rallies are a chance for the public to see that gun owners aren't scary people.

In Arizona and Oregon, some demonstrators came with holstered handguns or rifles on their backs. At the Kentucky Capitol, attendees gave a special round of applause for "the ladies that are packin'."

First-term Texas state Rep. Steve Toth was among attendees in Austin. He's one of several state officials nationwide who have proposed trying to curb federal gun restrictions in states.

In Hartford, Conn. -- less than 50 miles from the site of the December 14 mass school shooting in Newtown -- police say about 1,000 people showed up on the Capitol grounds Saturday, urging state and federal authorities not to introduce new restrictions on gun ownership, saying such moves would erode their Second Amendment rights.

In Maryland, where Gov. Martin O'Malley is backing a comprehensive measure that includes a ban on assault weapons and new licensing requirements for handguns, a demonstration in Annapolis drew a large crowd to Lawyer's Mall in front the state capitol, where demonstrators carried signs reading, "Guns Save Lives," and "It's not about Guns, It's about Control."

A demonstration was also held in Albany, N.Y., where the nation's toughest assault weapon and magazine restrictions were passed and signed into law last week.

Republican Assemblyman Steven McLaughlin told the crowd in Albany that New York's new law was an "abuse of power" by the governor.

"This is an outrage against humanity, what we're seeing," said protester Robert Candea, of Warwick.

In Frankfort, Ky., tea party leader David Adams spoke to the crowd, saying that the "government is out of control."

In Augusta, Me., dozens of gun-rights advocates gathered in front of the Maine State House, many standing in the snow and some holding flags and placards during Saturday's mid-day rally.

One demonstrator, Joe Getchell of Pittsfield, said every law-abiding citizen has a right to bear arms, and it's a constitutional right no one can take away.

Another demonstrator held a sign that said, "Educate Not Legislate."

In Columbia, S.C., a couple of hundred people came Saturday to the State House for the rally. Even more attended a nearby gun and knife show. People at both locations said interest was high because of President Obama's gun-control proposals.

Several hundred gathered in Des Moines, Iowa, for Saturday's "Guns Across America" rally. Twenty-seven-year-old Jolynn Heal, of North Liberty, drove more than 100 miles with her husband and 10-year-old son to protest President Obama's gun control measures, such as lowering the maximum number of bullets in a magazine clip. She said limiting the amount of ammunition in gun magazines makes it difficult to defend against multiple intruders.

In Lansing, Mich., some attending the rally freely carried guns at the event Saturday, reports MLive.com. In response to the proposed federal bans on assault weapons, some Republican state lawmakers want to pass a bill that would exempt guns made in Michigan.

In Harrisburg, Pa., scores of protesters rallied at the State Capitol, many of them carrying signs and American flags. Participants told local media that they favor the universal background checks advocated by the president, but not other proposed restrictions.

In Madison, Wis., Capitol police spokeswoman Stephanie Marquis said an estimated 500 to 600 people showed up for what the Facebook page promoting the event called a "peaceful picketing protest."

About 150 gun-rights advocates gathered in Richmond, Va., and walked around the perimeter of Capitol Square.

In Jefferson City, Mo., among Missourians protesting at the Capitol, Second Amendment supporter John Chenault told CBS Affiliate KRCG, "Who's to say we can or can't have something that is entertainment to us? The only thing it's ever done is gone out to the range and shot pieces of paper.

"There's a lot of politicians out there, they want to infringe on our rights, and I'm out here speaking against that," Chenault told KRCG correspondent Juliette Dryer.

Corey Boyles told the station he thought that by exercising gun control, the government was setting a precedent: "I'm afraid of them registering our weapons for the purpose of future confiscation," he said.

When asked how to address gun violence outside of gun control legislation, one protester suggested allowing teachers to carry concealed weapons.

And in Colorado, hundreds turned out for a pro-gun rally in Denver, with signs reading "Party like it's 1776" and "Registration is the first step to confiscation."

Republican State Rep. Chris Holbert of Parker told the crowd the Second Amendment is "a defense against tyranny."