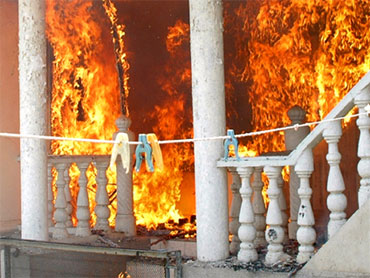 Mobs of rioters slaughtered Uzbeks and burned their homes and businesses in Kyrgyzstan's worst ethnic violence in decades, sending more than 75,000 members of the ethnic minority fleeing the country in attacks that appeared aimed at undermining the Central Asian nation's interim government.

More than 100 people were killed in southern Kyrgyzstan and more than 1,200 wounded in days of attacks, according to government estimates Sunday. The true toll may be much higher.

The International Committee of the Red Cross said its delegates witnessed about 100 bodies being buried in just one cemetery, and noted that the official toll is unlikely to include bodies still lying in the streets.

Fires set by rioters raged across Osh, the second-largest city in Kyrgyzstan, as triumphant crowds of ethnic-majority Kyrgyz men took control. Police or military troops were nowhere to be seen in the city of 250,000, where food was scarce after widespread looting and the few Uzbeks still left barricaded themselves in their neighborhoods.

The rampages spread quickly to Jalal-Abad, another major southern city 45 miles (70 kilometers) from Osh, and its neighboring villages, as mobs methodically set Uzbek houses, stores and cafes on fire. Rioters seized an armored vehicle and automatic weapons at a local military unit and attacked police stations around the region trying to get more firearms.

Some refugees were fired on as they fled to Uzbekistan. They were mostly elderly people, women and children, with younger men staying behind to defend their property.

Many of the more than 75,000 refugees arrived with gunshot wounds, the Uzbekistan Emergencies Ministry said, according to Russian reports.

"We saw lots of dead. I saw one guy die after being shot in the chest," said Ziyeda Akhmedova, an Uzbek women in her late 20s at one of several camps hastily set up in Uzbekistan along the border.

She was among the first refugees to reach the border on Friday and said the Uzbek border guards were reluctant to let them in until an approaching Kyrgyz armored personnel carrier began firing. She had little hope of returning home soon.

"Our houses have been burned down. I don't know how we will live, how we will talk to the people who shot at us," Akhmedova said.

The United States, Russia and the U.N. chief all expressed alarm about the scale of the violence and discussed how to help the refugees. The U.S. and Russia both have military bases in northern Kyrgyzstan, away from the rioting; Russia sent in an extra battalion to protect its air base.

Kyrgyz residents interviewed by AP Television News in Osh blamed Uzbeks for starting the rioting by attacking students and Kyrgyz women. Ethnic Kyrgyz from neighboring villages then streamed into the city to strike back, they said.

But Maksat Zheinbekov, the acting mayor of Jalal-Abad, told the AP that the true instigators were supporters of ousted President Kurmanbek Bakiyev who attacked both Uzbeks and Kyrgyz, the ethnic majority, to incite broader ethnic violence.

From his self-imposed exile in Belarus, Bakiyev denied any role in the violence and blamed interim authorities for failing to protect the people.

Interim President Roza Otunbayeva's government had hoped to seal its political and democratic credentials in a referendum to approve a new constitution on June 27, but the likelihood of that vote taking place now looks slim.

A government order for troops to shoot rioters dead failed to stop the spiraling violence. Police and the military appeared to be on the defensive across the south, avoiding clashes with mobs. Flights to both Osh and Jalal-Abad were canceled and the airports were closed.

In Jalal-Abad on Sunday, thousands of Kyrgyz men brandishing sticks, metal bars and hunting rifles marched together to burn Uzbek property while frightened police stayed away. Uzbeks felled trees on the city's main street, trying to block their advance.

Kyrgyz mobs tried to storm the city's hospital, but Uzbeks drove them off after a fierce gunbattle that raged for hours, witnesses said. Mobs also surrounded a local prison, trying to free its inmates, and attempted repeatedly to capture the Jalal-Abad police headquarters, but were repelled.

Kyrgyz mobs killed about 30 Uzbeks on Sunday in the village of Suzak near Jalal-Abad, Talaaibek Myrzabayev, the chief military conscription officer in the capital, Bishkek, told the AP. Another Uzbek village, Dostuk, was burned by Kyrgyz assailants, but it was not known how many people were killed, he said.

Ethnic Uzbeks ambushed about 100 Kyrgyz men Sunday on a road near Jalal-Abad and took them hostage, Myrzabayev said. Vehicles on the main highway near Jalal-Abad repeatedly came under fire from unidentified gunmen. Later in the day, troops were seen shooting at the gunmen.

In the nearby village of Bazar-Kurgan, 400 Uzbeks overturned cars and killed a police captain, local resident Asyl Tekebayev said. Residents said armed Kyrgyz men were flooding into the village to retaliate.

The official casualty toll Sunday rose to at least 104 people killed and 1,231 wounded, the Health Ministry said. The ministry said this included 21 dead in the main hospital in Jalal-Abad but not hospitals elsewhere in the region.

The Red Cross said in a statement that the bodies its delegates saw being buried in Osh raise concerns that the dead are not being properly identified before burial. It said a plane carrying medical supplies and body bags landed in Osh on Sunday, and additional staff and supplies were to be sent in the coming days.

The U.S. Manas air base in Bishkek is a crucial supply hub for the coalition fighting the Taliban in Afghanistan. Manas was working with the U.S. State Department and interim government to help deliver food and medical supplies, said Air Force Maj. John A. Elolf, a spokesman at the base.

Uzbekistan's Foreign Ministry condemned the riots and voiced hope that Kyrgyzstan will re-establish order. However, the country's authoritarian President Islam Karimov is unlikely to interfere in the conflict.

Russia refused Kyrgyzstan's request for military help to quell the rioting, but confirmed it sent extra reinforcements to protect its base. The Pentagon said the interim government had not asked for any U.S. military help.

In 1990, hundreds were killed in a land dispute between Kyrgyz and Uzbeks in Osh, and only quick deployment of Soviet troops quelled the fighting. With no Russian troops in sight this time, the interim government announced a partial mobilization of military reservists up to 50 years old.

"No one is rushing to help us, so we need to establish order ourselves," said Talaaibek Adibayev, a 39-year-old army veteran who showed up at Bishkek's military conscription office.

The fertile Ferghana Valley where Osh and Jalal-Abad are located once belonged to a single feudal lord, but it was split by Soviet dictator Josef Stalin among Uzbekistan, Kyrgyzstan and Tajikistan. The Stalinist borders rekindled old rivalries and fomented ethnic tensions.

Kyrgyz and Uzbeks are both predominantly Sunni Muslim. Uzbeks are generally better off economically, but they have few representatives in power and have pushed for broader political and cultural rights. While Uzbeks make up only about 15 percent of the overall population, they rival Kyrgyz in numbers in the Osh and Jalal-Abad regions.

Kyrgyz in Osh blamed Uzbeks for starting the violence.

"Why have the Uzbeks become so brazen?" said one Osh resident, who gave only her first name, Aigulia, because she feared for her safety. "Why do they burn my house?"

Aigulia said her house was destroyed by Uzbeks overnight and all her Kyrgyz neighbors had to run for their safety. She said the area was still unsafe, claiming Uzbek snipers were shooting at them.

A Kyrgyz man, Iskander, said he and others burned Uzbek property to avenge their attacks.

"Whatever you see over there - all the burnt restaurants and cafes - were owned by them and we destroyed them on purpose," he told the AP. "Why didn't they want to live in peace?"