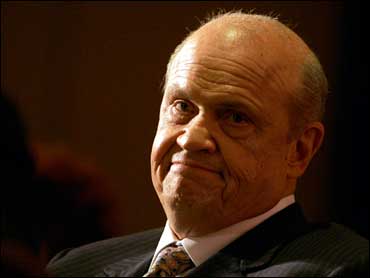 Fred Thompson, edging toward a presidential run, is giving up his day job playing a prosecutor on the TV series "Law & Order."

Thompson asked Wednesday to be released from the show after five seasons, series creator and executive producer Dick Wolf said.

"Although he told me he has not made a firm decision about his political future, he felt that given the creative and scheduling constraints of the upcoming season," he should leave "Law & Order," Wolf said in a statement.

The producer lauded Thompson's commitment to "Law & Order" and the new TV movie "Bury My Heart at Wounded Knee," in which the actor plays a president Ulysses S. Grant. The film, which Wolf produced, premiered Sunday on HBO.

Thompson, 64, a former U.S. senator from Tennessee, has yet to announce he's seeking the GOP nomination but has taken steps toward a summer entry into the crowded field. He has been casting himself in speeches and on the Internet as a Reaganesque conservative.

Thompson, a lawyer, began his acting career with the film "Marie" in 1985, about a high-profile legal case he handled in Tennessee and in which he played himself. His credits also include "In the Line of Fire" and "The Hunt for Red October."

Thompson served in the Senate from 1994 to 2002, resuming his Hollywood career when he left. On NBC's "Law & Order," which has been renewed for its 18th year, he played New York District Attorney Arthur Branch.