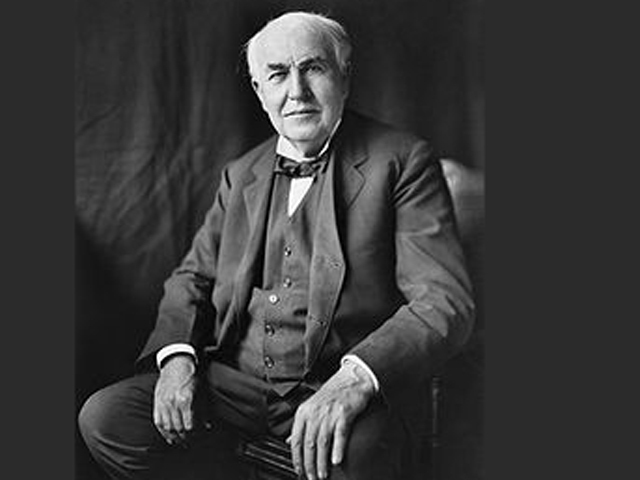 This Edison guy - it turns out that he knew a few things.

As if we needed any proof, the Wizard of Menlo Park had a keen insight into how technology would go on to shape our lives. In an interview with the Miami Metropolis in 1911, Thomas Alva Edison sketched out a future in which:

Truth be told, Edison wasn't 100% clairvoyant (who is?) He predicted that mankind would have discovered how to turn iron into gold so that by today we would be able to tool around in golden taxicabs. OK, he blew that one, but still a darned good reading of the tea leaves.

The full text of the article follows:

What will the world be a hundred years hence?

None but a wizard dare raise the curtain and disclose the secrets of the future; and what wizard can do it with so sure a hand as Mr. Thomas Alva Edison, who has wrested so many secrets from jealous Nature? He alone of all men who live has the necessary courage and gift of foresight, and he has not shrunk from the venture.

Already, Mr. Edison tells us, the steam engine is emitting its last gasps. A century hence it will be as remote as antiquity as the lumbering coach of Tudor days, which took a week to travel from Yorkshire to London. In the year 2011 such railway trains as survive will be driven at incredible speed by electricity (which will also be the motive force of all the world's machinery), generated by "hydraulic" wheels.

But the traveler of the future, says a writer in Answers, will largely scorn such earth crawling. He will fly through the air, swifter than any swallow, at a speed of two hundred miles an hour, in colossal machines, which will enable him to breakfast in London, transact business in Paris and eat his luncheon in Cheapside.

The house of the next century will be furnished from basement to attic with steel, at a sixth of the present cost -- of steel so light that it will be as easy to move a sideboard as it is today to lift a drawing room chair. The baby of the twenty-first century will be rocked in a steel cradle; his father will sit in a steel chair at a steel dining table, and his mother's boudoir will be sumptuously equipped with steel furnishings, converted by cunning varnishes to the semblance of rosewood, or mahogany, or any other wood her ladyship fancies.

Books of the coming century will all be printed leaves of nickel, so light to hold that the reader can enjoy a small library in a single volume. A book two inches thick will contain forty thousand pages, the equivalent of a hundred volumes; six inches in aggregate thickness, it would suffice for all the contents of the Encyclopedia Britannica. And each volume would weigh less than a pound.

Already Mr. Edison can produce a pound weight of these nickel leaves, more flexible than paper and ten times as durable, at a cost of five shillings. In a hundred years' time the cost will probably be reduced to a tenth.

More amazing still, this American wizard sounds the death knell of gold as a precious metal. "Gold," he says, "has even now but a few years to live. The day is near when bars of it will be as common and as cheap as bars of iron or blocks of steel.

"We are already on the verge of discovering the secret of transmuting metals, which are all substantially the same in matter, though combined in different proportions."

Before long it will be an easy matter to convert a truck load of iron bars into as many bars of virgin gold.

In the magical days to come there is no reason why our great liners should not be of solid gold from stem to stern; why we should not ride in golden taxicabs, or substituted gold for steel in our drawing room suites. Only steel will be the more durable, and thus the cheaper in the long run.

Study: Brain can learn to "see" again after blindness