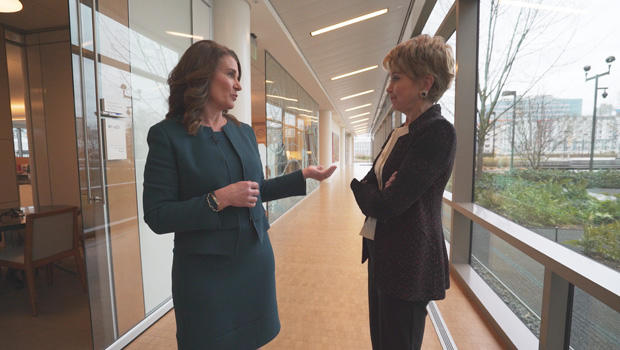 Q&A: Melinda Gates on making a successful life | Watch Video
Jane Pauley interviews the philanthropist who, through the Bill and Melinda Gates Foundation, brings data -- and tens of billions of dollars -- to her commitment to improve global public health.

OUR MAN IN PARIS: Hats off to the beret! | Watch Video
In the south of France is a small museum dedicated to a hat … the beret, that French cap which originated in the Pyrenees about 400 years ago. Making one today draws on the same techniques that have been used for centuries, and yet it’s never gone out of style. David Turecamo reports.

FOR THE RECORD: Ed Sheeran: Reinventing pop music | Watch Video
The English singer-songwriter is one of the most successful artists of his time, and an idol to millions around the world. His most recent songs off his newest album, “Divide (÷),” have been sitting on top of the Billboard charts.

Sheeran talks with correspondent Mark Phillips about his career and the music business; his early days producing and distributing his own music; and why he stayed out of the limelight for a year.

Phillips also goes with Sheeran to the singer’s favorite fish and chips shop and some of the places in his hometown that have made their way into his songs (like “Castle on the Hill”).

To watch the music video of Ed Sheeran’s “Shape of You,” from his album “Divide (÷),” click on the video player below.

PASSAGE:  Judge Wapner (Video)
It happened this past week - the death of TV judge Joseph Wapner, who for years dispensed justice from the bench of “The People’s Court.” Jane Pauley reports.

TRANSPORTATION: Renovation nation: The prospects for repairing America’s infrastructure | Watch Video
The country’s roads, bridges and airports are in dire need of work -- but where will the money come from? Correspondent Kris Van Cleave examines how city, state and federal governments are debating how to pay for improvements in our transportation infrastructure, from raising gasoline taxes to using private money to build costly-to-drive toll roads.

HARTMAN: How faith helped one young basketball player succeed (Video)
Sophomore Caleb Swanigan, of Purdue University, may be the most talented college basketball player in the country, but he is also the most unlikely. Steve Hartman tells of Swanigan’s remarkable story, and of the former professional athlete and mentor who inspired him with an unshakable faith.

SUNDAY PROFILE: Kellyanne Conway: Counselor and target | Watch Video
The controversial White House senior adviser opens up to CBS News’ Norah O’Donnell about the pressures of working in the male-dominated world of politics.

PREVIEW: Kellyanne Conway says you need “bile in your throat” to run for office

CALENDAR: Week of March 6 | Watch Video
“Sunday Morning” takes a look at some notable events of the week ahead.

NATURE: Sandpipers (Extended Video)
We leave you this Sunday Morning in the company of sandpipers scurrying along a beach on the east coast of Florida. Videographer: Charles Schultz.