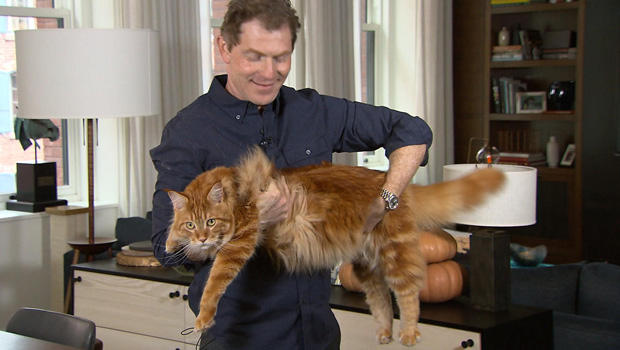 Many viewers wrote in asking for equal time following Conor Knighton’s report last September about adorable sled dog puppies. Felines have fans, too -- and our friend chef Bobby Flay is among them:

From the time I was born there were always cats in my house. My mom was and still is obsessed with them. As an only child they were as close to my brothers as I had. I spent countless hours side by side with them and we kept each other company.

My mother was very creative when it came to naming them (Yes, I’m being sarcastic). There was Marshmallow, with his single white paw; Smokey, Misty and Cocoa, who had beautiful brown points to their coats; and my very favorite, Pumpkin. You guessed it; he was an orange tabby. I wanted him because he matched my hair, and as a five-year-old boy, nothing could be cooler in my mind. Finally, a sibling!

Until I moved out of my Mom’s house at 19, these felines were part of my every day and night. I missed them when I was away, and I cherished the moment of opening the front door when they would all gather to welcome me home.

As an adult, I had a 30-year drought without a cat in my home life. It was easy for me to make the excuse that I was never home. But what I was really nervous about was handling the responsibility of taking care of a new kitten -- and making a 15-20 year commitment to a living, breathing creature.

If you have an Instagram account, there’s a chance you’ve met my current feline companion, Nacho (or as he’s known in social circles, NachoFlay).

Nacho is a Maine Coon, a breed known mostly for their exceptional size. They are known as the “gentle giants” of domestic cats.

At just two years old, Nacho is approaching 20 pounds, and my guess is he’ll eventually eclipse that.

Here’s the thing: I’ve been disputing the aloof and uncaring reputations cats have versus my dog-owning friends for decades. But Maine Coons -- especially this one -- have so many canine traits. Nacho plays fetch, he opens every door in my house, he follows me from room to room, and is never out of ear shot. And neither am I!

He travels with me almost wherever I go and, most importantly, shows me his love and affection constantly.

I often wonder if I wasted three decades without a cat roaming my home, especially when I look into Nacho’s eyes and I can almost hear his thoughts. He knows when I’m feeling a little under the weather or I’m having a case of the blues. He makes me a softer and more understanding person just by his presence and affection.

The world has a way of giving you what you need, and sometimes a new best friend shows up when you need him the most.