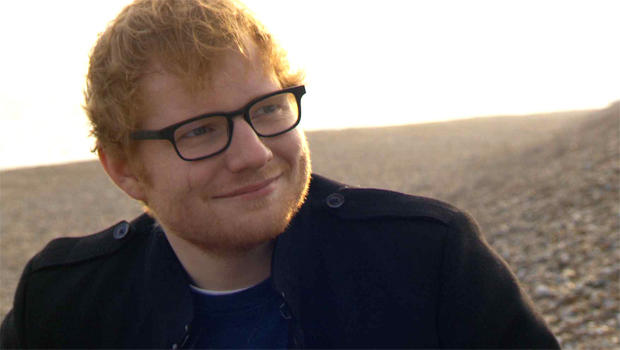 "Thinking Out Loud" by Ed Sheeran won the Grammy for Song of the Year just one year ago. Now, this year, Sheeran is releasing a brand new album, while also revisiting some of his old favorite places. Our Mark Phillips went along:

To hear Ed Sheeran talk about the place he grew up, you wonder why he ever left. And then you realize, in a way, he never did.

As they approached one establishment, Phillips asked, "What's special about this place?"

"It's the best fish and chips in England," Sheeran replied.

And is he a vinegar guy, or a no-vinegar guy? "Vinegar and salt, yeah. I don't know why you'd have fish and chips without it!"

Sheeran is 26 now, and may be the hottest thing in the pop music business. In fact, he seems to be reinventing it.

The teaser tracks released in advance of his new album, including "Shape of You," have gotten Internet hits counted in the billions.

When Sheeran released two advance tracks for his new album instead of the usual one, people said he was crazy -- they'd fight each other. But he was right. Both songs ("Shape of You" and "Castle on the Hill") have been sitting at the top of the charts since the day they were put out, the first time that's ever happened.

Yet here, on England's East Coast, where he grew up, Sheeran still eats his lunch one chip at a time.

"I think what's beautiful about this area [is] no one's treated me any different. It's still the same people working in the fish and chip shop treat me exactly the same."

There's a method to his success. First, write catchy songs about stuff you know, such as "Castle on the Hill."

Fifteen years old and smoking hand-rolled cigarettes,
Running from the law through the backfields and getting drunk with my friends,
Had my first kiss on a Friday night, I don't reckon that I did it right
But I was younger then,
take me back to when…

The castle is a medieval ruin in his hometown where he and his friends used to hang out.

"This is the castle on the hill," he said. "This was what the song is about."

"This is a legitimate teenage hangout, where you and your pals would come on a Friday night with tins of beer, I suppose?" Phillips asked.

"Yeah, this is the spot. You'd get, I don't know, 20 cans and sit on that hill. I'm just really, really in love with the place that I'm from, much like Springsteen would write about New Jersey, I guess."

Beyond writing the songs, Sheeran also wrote his own rules about how to sell them.

Like so many others, he had set off for London as a teenager, singing on street corners and in pubs. But he didn't knock on record company doors or wait to be discovered. Instead, he began marketing his own stuff, releasing his music himself on websites until -- inevitably -- a record label came calling.

He had already earned half a million from his independent sales, putting the music out himself.

"I suppose you could say it paid off," Phillips said.

His next album he called "Multiply (X)." (He has a thing for math.) It hit number one in the U.K. and the United States.

It's hard to go to a wedding these days without the bride and groom dancing to the big single from that one, "Thinking Out Loud." This, by the way, was the first of Sheeran's music videos in which he himself appeared.

"That was me at the beginning of my career. I wasn't in any music videos at all," Sheeran said.

"Because you wanted the music to speak or because you were insecure about how you looked?"

"But you seem to have gotten over it?"

Boy, do they sell! Sheeran may be a worldwide megastar now, but to his fans he seems like a small act that made it big -- he says, thanks to them.

Who helped him first? Fans, he says. "It was file sharing. I know that's a bad thing to say, because I'm part of a music industry that doesn't like illegal file sharing."

"Yeah, but illegal fire sharing was what made me. It was students in England going to university, sharing my songs with each other."

"Yeah, I think people rip off YouTube. That's a thing. But I feel like it's so easy to stream."

He's also written for other stars, like Taylor Swift and Justin Bieber. And he's written for the movies ("I See Fire," from "The Hobbit: The Desolation of Smaug").

However it happened, Sheeran became big enough to fill Madison Square Garden three times. And because people said he could never do it, he booked London's 80,000-seat Wembley Stadium, also for three nights, and filled that, too.

And then, he stopped. Packed it in. Vanished. For a year.

Why did he do it?

"Not losing touch, but I was definitely in a spiral work and partying that probably would've ended not well," Sheeran said. "But also, I think, as much as I needed a break, I think the public needs a break from you. If you continually are just in everyone's face the whole time, eventually they're gonna be like, 'Eehhh, yeah, you know what, I'm cool.'"

If the sales of the new album called, inevitably, "Divide (÷)," are any indication, Sheeran's fans missed him. Maybe he really needed a break. Maybe it was another really clever marketing ploy. Maybe both.

What does seem clear is that it worked.