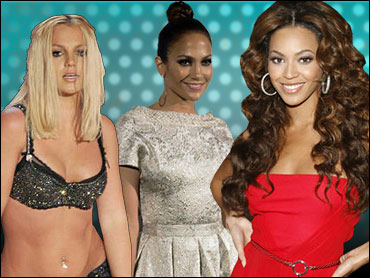 It wasn't just any dress that was nabbed from a luggage cart as Channing and her husband were checking into the Hollywood Renaissance Hotel. It was the shimmery signature number that she wore in "Gentlemen Prefer Blondes" and it was bound for the Smithsonian. Channing put its value at $150,000.

No one was putting a price tag on the skimpy black bikini Britney Spears was sportingwhen she opened MTV's Video Music Awards ceremony Sunday night, but it contributed to a bankrupt comeback for the pop star. What was supposed to be her brilliant return to performing turned into another meltdown for the catastrophe-prone singer.

But Britney wasn't the only one getting headlines at the VMAs. Singer Kid Rock was cited for trying to add some black and blue to drummer Tommy Lee's red-carpet look. Both are ex-husbands of actress Pamela Anderson.

Red carpet photos of MTV presenters and guests appeared around the globe the next day and bloggers especially had a field day with the best and the worst.

Red was the color of carpets this week in Toronto, where Hollywood's hottest stars were promoting their latest movies at the Toronto International Film Festival. But gold, as in Oscar, was the color on everyone's mind. No one has sewn up the Oscars race yet, but

But before there is Oscar, there is Emmy. Predictions of winners vary as widely as women's hemlines but one thing is sure: A lot of thought goes into what the stars will wear to this weekend's ceremony. (Don't forget to check back here Monday for the red carpet photos.)

Throughout the week, clothing designers on the catwalks of New York's Fashion Week.

Also this week, People magazine unveiled its best-dressed list giving high marks to Beyonce, Cameron Diaz and Jennifer Lopez. Foxy Brown announced she won't be shopping for maternity clothes after all and fellow rapper Remy Ma was spared a wardrobe of prison stripes when a judge denied a prosecutor's request to hike her bail following her new indictment on witness tampering and gang assault charges.

Finally, O.J. Simpson (of the "If the glove doesn't fit" fame) was questioned about a break-in at the Palace Station casino in Las Vegas late Thursday night and is considered a suspect in the case. Police say the burglary involved sports collectibles. Was someone looking for sports jerseys,perhaps?