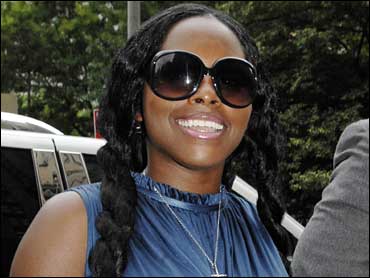 In what could have helped the public sympathize with feisty rapper Foxy Brown will no longer suffice, for the star isn't pregnant after all.

Jail officials will not need to make maternity accommodations for Foxy Brown - her manager says the rapper isn't pregnant, despite her lawyer's courtroom contention that she was.

The revelation came Wednesday as her manager and Koch Records announced that Brown would release a new album while serving a one-year jail sentence.

Brown, who hasn't released an album since 2001's "Broken Silence," was sentenced Friday to one year in jail for violating probation that stemmed from a fight with two manicurists in a New York City nail salon three years ago.

In August, defense lawyers told the court that Brown was three months pregnant. But in a statement released Wednesday, her manager, Chaz Williams, said: "And to the pregnancy rumors, this is the official statement: She is not pregnant."

Brown herself didn't address the issue of pregnancy in her statement about her new album, "Brooklyn's Don Diva," which is set for release Nov. 20. Her new single, "Don't Surrender," will be released to radio stations Thursday, Giovanna Melchiorre, a representative for the independent Koch Records, said.

"This is just a temporary situation," Brown said in a statement. "I made my bed and have no problem lying in it. My will is steady. What doesn't kill me will only make me stronger."

Brown, whose real name is Inga Marchand, was arrested last month in the New York City borough of Brooklyn on charges of hitting a woman with a cell phone when the pair fought over the music volume from Brown's car stereo. Her other violations include leaving the state without permission and dropping court-ordered anger management sessions with a psychologist.

"I visited Foxy at (Riker's Island prison) the day after sentencing, and her spirits were high," Williams said. "I expected nothing less. I was in court at sentencing and she didn't blink an eye. She's a strong girl."

Before Friday's hearing began, Brown asked Criminal Court Judge Melissa Jackson for a second chance and promised to straighten out her life. But Jackson didn't budge.

"I'm not going to give you any more chances," she told Brown.